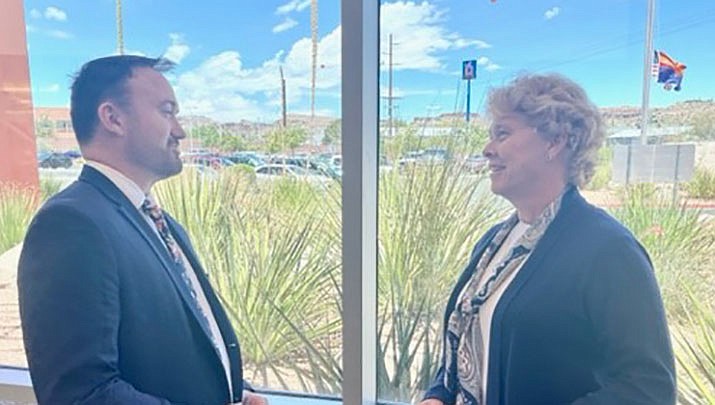 KINGMAN – Mohave County’s new Public Health Director Chad Kingsley said his department will continue to monitor the monkeypox situation after the first suspected case was reported in the county this week, but he said the department isn’t overly concerned at this point.

On Tuesday, Mohave County spokesman Roger Galloway said a suspected case of monkeypox has been reported in the county, but he is not able to share details about where the reported case came from nor any details about the patient. Galloway said samples have been collected, the patient is being isolated, and test results should be available this week to verify whether or not they have the disease.

Kingsley gave a little bit more insight into the county’s current situation when speaking with the Tri-City Council in Bullhead City on Wednesday. He said the county has a “suspected case,” which he noted is different from a “probable case” or a “confirmed case.”

“Probable means that we have a patient that presented and they have signs of symptoms of the disease, or they were in known direct contact with somebody who is confirmed,” Kingsley said. “Suspected is most likely that they have similar criteria to the disease but not exact, and they have had no known contact. We have a suspected case here in the county, but no probable at the moment.”

According to the federal Centers for Disease Control and Prevention, there have been 9,493 confirmed cases of monkeypox nationwide. The Arizona Department of Health Services reports 118 “confirmed or probable” cases as of Thursday – none in Mohave County. Kingsley told the Tri-City Council that there are currently 85 confirmed cases in the state.

“It is not a high risk here in Arizona, with the number of cases that we have,” he said.

Kingsley said he understands that monkeypox has become a bit of a hot topic recently with lots of reports in the media and chatter on social media. He said that is to be expected in the wake of the COVID pandemic. But Kingsley said the country has been through situations similar to the current monkeypox outbreak before.

“We are coming off a pandemic where we have a different type of heightened awareness,” Kingsley said. “So when any type of new disease presents itself I think we might be a little bit hyper-aware. I think that may be the case with what we have here with monkeypox. We have had previous outbreaks years before, but we are getting more attention on this one than the previous outbreaks we have had over the last few decades.”

Kingsley told Today’s News-Herald that the most significant previous monkeypox outbreak in the United States occurred in 2003, which was the first time monkeypox was confirmed outside of Africa. He said there were 43 confirmed cases spread over six states back in 2003, and all of the patients who developed the illness recovered.

Kingsley said there are already approved vaccines available for monkeypox, and in the event that they are needed Mohave County would have access to vaccines stored in Coconino County which could be distributed to at-risk communities in the event of an outbreak.

“We would be able to address those that are higher risk in our communities if we need to,” Kingsley said. “But at this time, you are going to see a lot in the news. We will just continue to monitor and follow the processes that are available to us.”

Kingsley said the LGBTQ community is most at-risk of contracting monkeypox, particularly gay or bisexual men. He said the disease has begun to spread to people outside of that group as well, but confirmed that the risk is still relatively low.

“It is a very skin-to-skin contact type of transmission,” Kingsley said. “Understand, this is the same thing as chickenpox, smallpox – they are all related to the same family.”

According to the CDC, human-to-human transmission of monkeypox can result from skin to skin contact, or contact with a recently contaminated object such as clothing. Monkeypox can also spread through respiratory secretions, which typically requires prolonged face-to-face contact.

The CDC says symptoms of the infection include fever, intense headache, back pain, muscle acres and swelling of the lymphnodes which generally last 0-5 days. Rashes usually develop within 1-3 days of the appearance of a fever, and are generally found on the face or extremities. The CDC says rashes appear on the face in 95% of cases, on hands or feet in 75% of cases, and on genitalia in 30% of cases.

Symptoms typically last between two to four weeks, according to the CDC.