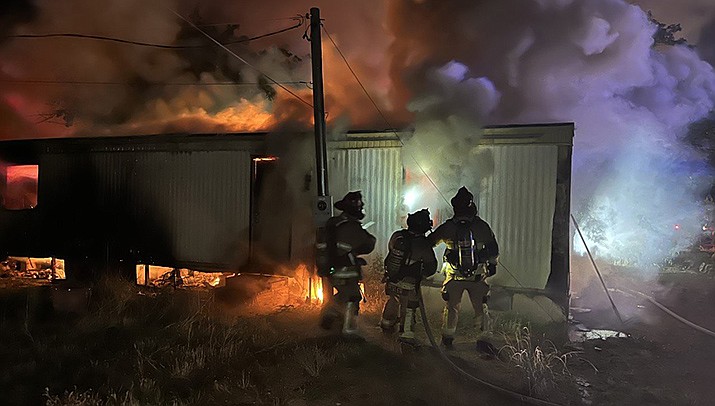 Firefighters from the Northern Arizona Fire District attack a structure fire in the 2100 block of E. Packard Ave. near Kingman on Thursday, Aug. 11. The cause of the fire is under investigation. (NAFD courtesy photo)

KINGMAN – Northern Arizona Fire District firefighters responded to a structure fire that resulted in the total loss of an abandoned building.

According to an NAFD news release, firefighters from NAFD and Kingman responded at 1:30 a.m. Thursday, Aug. 11 to a fire in the 2100 block of E. Packard Avenue in Kingman.

Although firefighters “aggressively attacked” the fire and protected surrounding structures, the abandoned house was lost.

Upon arrival, firefighters found a heavily involved attached garage/carport with fire extending to the doublewide manufactured home. A second alarm was requested due to the exposures of the adjacent structures.

There were no reported injuries and no utilities inside the building.

According to law enforcement, the house has recently had criminal activity that is under investigation by the Mohave County Sheriff’s Office.

NAFD said the fire is suspicious and the cause is under investigation.