Hero: Lost Kingman boy makes it home thanks to an act of kindness 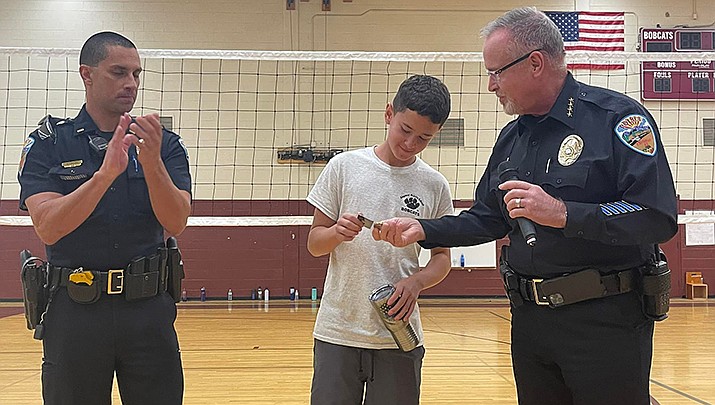 KINGMAN – Levi Cortez, 13, of Kingman was recently awarded for his heroic and selfless act of getting a lost and injured child to safety.

When Cortez and his friend Shamar Lemon spent the beginning of summer wandering around outside, they were approached by a 7-year-old boy who was scared because he was lost. Cortez said “he seemed a bit off” because he didn’t know who he was and couldn’t remember where he lived.

“He started acting strange and I could tell something was wrong,” Cortez said.

The boy told Cortez and Lemon that he fell and hit his head before falling asleep. When he woke up, he was confused and lost. The boys walked with the child to try and help him find his house.

However, Cortez and Lemon made the decision to take him to the emergency room so staff could help find his parents and get medical attention, especially since he couldn’t remember basic details about his life.

“He was getting so tired and we started giving him piggy back rides,” Cortez said. “He started getting really scared because it was already getting dark and he couldn’t remember where his home was.”

When they got to the hospital, staff at the front desk called the police to help find his parents and ask Cortez and Lemon questions. Cortez said his phone died during the walk, so he was able to contact his mom from the hospital to let her know he was safe.

Cortez and Lemon never found out what happened to the boy because their parents picked them up before a diagnosis. Cortez said he was just focused on getting the boy to a safe place and couldn’t recall his name. However, the young boy made it home safely.

Kingman Police Department and Kingman Middle School recognized Cortez and Lemon’s kind actions at a recent assembly. Lemon moved over the summer and wasn’t present at the assembly.

“I thought it was pretty cool how they made me feel special and not some average kid at school. It was a really cool experience,” Cortez said.

The eighth grader received a KPD thermos and a Route 66 gold coin to applaud him for his swift actions to help the kid and take him to a safe place. While Cortez was acknowledged for his heroic actions, he doesn’t consider himself a hero.

“I don’t really consider myself a hero, but I really appreciate everyone who thinks that,” Cortez said. “Just be yourself and always help someone in need.”