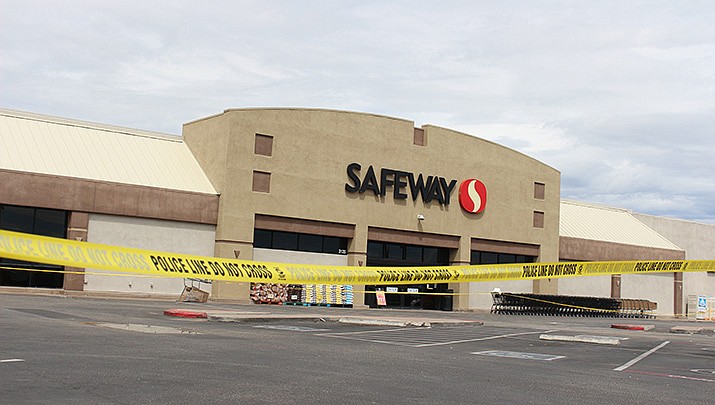 The parking lot at the Safeway grocery store in Kingman is surrounded by police tape after the building experienced a partial roof collapse on Saturday, Aug. 13. (Photo by MacKenzie Dexter/Kingman Miner)

KINGMAN — The roof of the Safeway grocery store at 3125 Stockton Hill Road partially collapsed during a storm on Saturday, Aug. 13.

According to Nancy Keane, public affairs and government relations officer for Albertsons Safeway, no injuries were reported. Keane said the damage is being evaluated and there is no further information at this time.

The Kingman Miner asked about the status of workers now that the store will temporarily be closed, details on what caused the collapse and an estimation on when the store will reopen but the company did not respond.

The Kingman Police Department and the Kingman Fire Department did not respond with details as of 3 p.m. on Monday, Aug. 15. No news releases were sent out over the weekend, and no Facebook updates were released on local public safety pages.