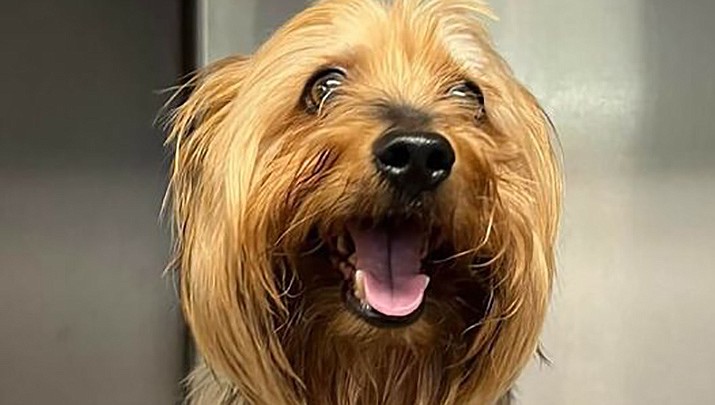 Phillip is shown in his cage at the Mohave County Animal Shelter. He was rescued from a hot vehicle by good Samaritans. (MCSO photo)

According to MCSO, while the windows were cracked, animal control officers were called to a Fort Mohave business on Tuesday, Aug. 16 after a report that a small dog, Phillip, was in the vehicle on a 109-degree day.

Video surveillance from the business was obtained and revealed that the male and female subjects had been inside the business for a total of twenty-four minutes.

Once on scene, officers contacted two witnesses, who advised they observed a male and female subject enter the business, leaving the small dog inside the non-running vehicle with the windows cracked. After several minutes, the witnesses called law enforcement and removed the dog from the unlocked vehicle.

While waiting for officers to arrive, the dog’s owners exited the business and were confronted by the witnesses. When advised that law enforcement was on the way, the two subjects left the scene in their vehicle, leaving the dog behind.

According to law enforcement, the dog was in moderate distress but did not require medical attention.

A records check revealed the name and addresses of the male and female subjects.

Officers responded to the address and made contact with both subjects, who admitted to leaving the dog inside the vehicle but claimed it was only for a short time. Both subjects were advised to meet at the Mohave Valley Substation the next morning to discuss the possibility of regaining custody of the dog.

The following morning, both subjects met officers at the substation. Officers made the decision to issue criminal citations for Animal Cruelty to both subjects and seize the dog for safety reasons. The dog was transferred to the Mohave County Animal Shelter pending a custody hearing.

Arizona House Bill 2494 was passed in May 2017 as a way to end hot-car deaths. This law allows good Samaritans to take action without the risk of civil liability if they rescue a child or a pet from a hot car. Law enforcement recommends everyone familiarize themselves with the specifics of this law before removing a child or animal from a vehicle.