After certifying in ‘duress’ Gould speaks out 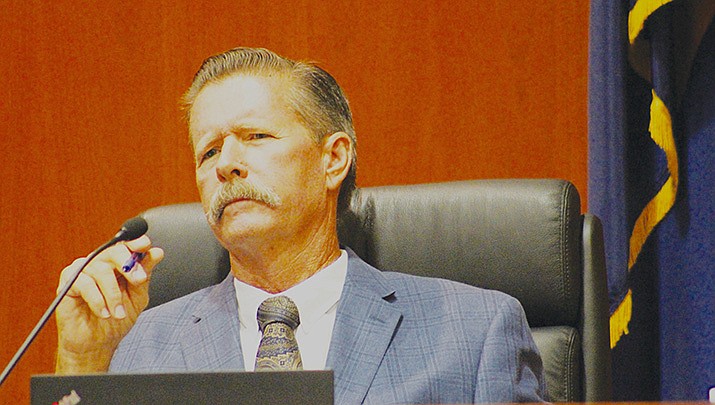 Mohave County Supervisor Ron Gould of District 5 has released a statement explaining why he voted in favor of certifying the county's 2022 General Election. (Miner file photo)

KINGMAN – Mohave County Board of Supervisors Chairman Ron Gould of District 5 certified the county’s election results from the Nov. 8 direction in “duress.”

Since then, he’s released a news release stating the canvass delay was a “political statement” to the role the Maricopa County Supervisors played in the election.

Supervisors certified the election on Monday, Nov. 28 after first delaying the canvass. The board flirted with not certifying the election but ultimately did shortly after 2 p.m. on Nov. 28.

If Supervisors did not certify the election, they could have faced criminal charges and possibly jail time.

During the Nov. 28 special meeting, Gould proposed obtaining an outside inspection of cast ballots, cast vote record and the system file log.

A court order would have been needed to get that information.

The press release reads as follows:

Mr. Tempert has been election director for over 20 years and knows his job well.

You will always have hiccups in an election, but my office received only two complaints regarding this election. The Supervisors held off the canvass until the deadline of Nov. 28 to allow any complaints to rise to the surface and make a political statement to the Maricopa County Supervisors regarding their poor handling of their county’s election. I received many requests to not canvass our election. The ramifications of not canvassing Mohave County’s election are:

Another fact to keep in mind: The candidates cannot begin the lawsuits to challenge the election results until the completion of the State Canvass. The canvass is not the end of the process, it is a step along the way.

A legal problem has surfaced as we have moved through the canvass process. We received a letter from the Secretary of State’s office informing the Supervisors that we would be criminally charged with a class 6 felony if we didn’t vote to canvass. That threat was confirmed by the board’s attorney, that a “NO” vote could bring a criminal charge. Some have attempted to label me a coward for not voting “NO”, but as you can see there was really nothing to gain by my constituents from me voting “NO”. There are other legal paths to follow regarding this issue.

The policy of “vote yes to canvass or go to jail” is clearly not what our founders had in mind when they formed our Republic.