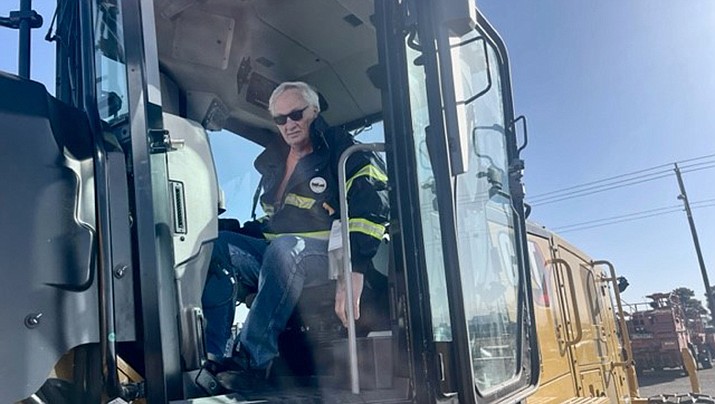 KINGMAN – Randy Janssen is the Mohave County fleet manager. He is in charge of all of the maintenance, service, repairs, purchases and eventual auction of said vehicles. It’s a job he was born for, starting back when he was a teenager working at a gas station. He was born in Iowa, but grew up in Lakewood, Colorado,

As far as living in the county, Janssen has resided in Lake Havasu City, Bullhead City and eventually settled permanently in Kingman. He began working at a large warehouse in the Mohave Valley before coming to the county. He says "my career has always been in and around equipment and vehicles. I’m either repairing them or managing the fleet, both private and in government.” It’s all part of who he is and he’s perfectly fine with that.

“They’re all part of the whole county system and vital to county fleet efficiency.

Janssen says “we also have shops in Mohave Valley and Lake Havasu that are staffed with one fleet mechanic and one equipment mechanic. The parts room supports all of the mechanics at all locations, as well as assisting with outside repairs on vehicles on the Arizona Strip.”

Janssen oversees all the services, repair and purchases of all county vehicles. It includes the yearly auction. (The next one will probably be in May. Great bargains should be available.)

There are currently 289 assigned vehicles in the county’s fleet. Janssen says this includes law enforcement vehicles. Also, there’s a carpool group in which vehicles are rented to county employees for business travel. Janssen’s department itself has 20 employees currently and is looking to hire one or two more.

The yearly maintenance budget is about $2million. It includes loaders, dump trucks and other vital equipment.

The day Janssen took a photo for this article, he received delivery of a brand new county $250,000 Caterpillar grader. It will initially be used for training at the Hualapai Pit. It’s super high tech with joystick controls like a high-tech video game.

Janssen has an adult son and daughter and spends much his free time with Lilly, his feisty Australian shepherd dog, which he rescued from the Mohave County Animal Shelter. He says she is “my special sidekick.” Actually, he has another sidekick with his 4-wheel drive Jeep, which he loves to use for exploring in the county deserts.

Janssen says “all in all, my group is doing a remarkable job keeping costs down and equipment and vehicles on the road.” He salutes them with a “hats off” knowing they keep all vehicles in great shape with a safety-first commitment in which their moms and dads could ride off in one without worries. Yep. That’s a truly safe concept.