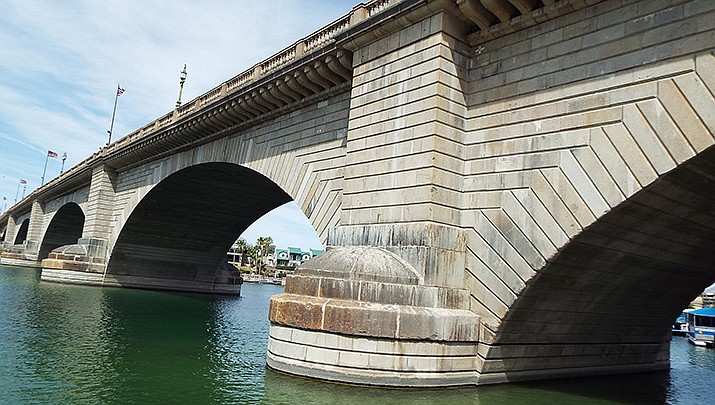 State Rep. Leo Biasiucci (R-Lake Havasu City) plans to take another crack at a second bridge over the channel in Lake Havasu City to provide a second entry and exit onto the Island and decrease the amount of traffic over the historic London Bridge. (Photo by Marine 69-71, cc-by-sa-4.0, https://bit.ly/3FavBYH)

LAKE HAVASU CITY – State Rep. Leo Biasiucci (R-Lake Havasu City) plans to take another crack at a second bridge over the channel in Lake Havasu City to provide a second entry and exit onto the Island and decrease the amount of traffic over the historic London Bridge.

Last year, Biasiucci introduced a bill in the House that would have provided a total of $22 million from the general fund to construct a second bridge over the channel in Havasu, and also supported naming the bridge the Freedom Bridge. That bill was cosponsored by the rest of District 5’s state delegation – Sen. Sonny Borrelli and Rep. Regina Cobb, but it ultimately stalled during the 2021 State Legislative Session and did not receive a full vote.

Biasiucci said the second bridge will be one of his major priorities this year, but he plans to take a little different approach in trying to get the project off the ground during the 2022 Legislative Session.

“We are talking to Congressman (Paul) Gosar (Arizona – D4) trying to see what kind of grants we can get from the federal level to help out as well,” Biasiucci said. “Right now we are really trying to put together a package where we can get some buy-in from the city, the state, and the federal sectors so we can hopefully get this across the finish line this year.”

Although Biasiucci is hoping to get everybody on the same page and work out funding commitments from multiple sources this year, he said the project itself will likely take several years to complete once it kicks off. The specifics of the bill are still being worked out, but Biasiucci said he expects his proposal would commit the state to providing money to the project over the course of two or three years.

“If the money is not used then it would come back to the state general fund,” he said. “We want to make sure that it is moving forward, and if it is not then we don’t want to waste any money. From our part, at the state level, we provide the funding but it is really up to the city, and if the feds are involved, to really get that completed.”

Although a second bridge has been discussed in Havasu for decades, Biasiucci said they don’t know exactly how much the project would cost yet.

“There has been talk of anywhere from $20 million to $30 million,” he said. “I believe the bridge in Bullhead is in the $30 million to $40 million range – but that is obviously a longer bridge.”

Biasiucci said the first year of the project would likely be dominated by studies, designing, and architectural engineering.

“That is going to take some time because you are going to have to figure out the traffic situation, how many people are coming off and on the bridge, where it’s going to connect to the road,” he said. “So the first year is really going to be about figuring out the logistics behind everything.”

Lake Havasu City Manager Jess Knudson said he hasn’t seen the specifics of Biasiucci’s plans yet, but the city is grateful that he has taken up the issue.

“We fully support Representative Biasiucci and all the great things he has done for Lake Havasu City while in the legislature,” Knudson said. “His desire to learn more about the need for the second bridge, and possibly identify a funding source, is a good thing. We are supportive of his efforts and grateful for his efforts.”

In March, Lake Havasu City asked residents about their desire for a second bridge over the channel as part of its National Community Survey. According to the results, 67% of residents support a second bridge while 33% are opposed.

Borrelli said he plans to support Biasiucci’s efforts in the House by championing the bill in the State Senate.

“If it gets out of the house, I’ve got to push for it in the senate. If I push for it in the senate, is has to be pushed for in the house. That is how the team works,” Borrelli said. “We will try, all you can do it try. It does have a safety nexus to it because if something happens on that bridge there is only one way on and one way off, and emergency vehicles may not be able to get through. I believe there is also a nexus because it is state land.”

Although past efforts to build the bridge have remained unrealized, Biasiucci said he feels good about the bill’s chances this year.

“Obviously you never know what is going to move forward, and what is not, in the legislature,” he said. “The good news is we really want to emphasis infrastructure. We have been doing that for the last few years with Highway 95 being repaved, and putting a lot of work on highways, road and bridges in other parts of the state. So I think there is a good opportunity because that has been a focus for us, and we also have some extra funding these last few years where we are exceeding our budgeted revenues for the year – this year we have a $3 billion surplus. So if there was a time to get this infrastructure project done, now would be the time to do it.”