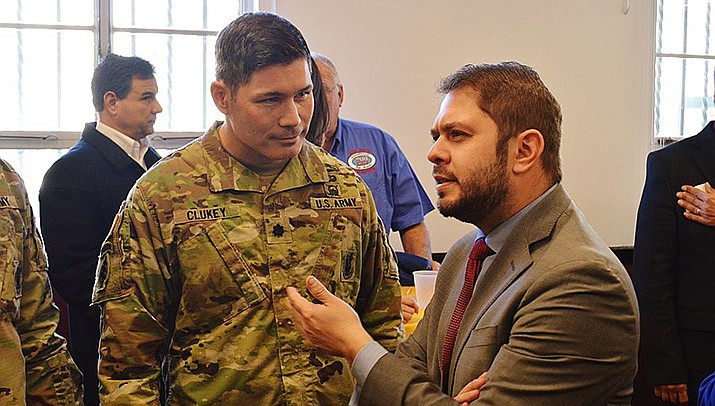 The publisher of a memoir by U.S. Rep. Ruben Gallego (D-Arizona) is correcting a passage about a deadly Iraq War battle that that falsely alleged that Ellen Knickmeyer, the Baghdad bureau chief for the Washington Post at the time and now with The Associated Press, had reported his whole platoon had been lost. (Public domain)

NEW YORK – The publisher of a memoir by Rep. Ruben Gallego of Arizona is correcting a passage about a deadly Iraq War battle that falsely alleged that Ellen Knickmeyer, the Baghdad bureau chief for the Washington Post at the time and now with The Associated Press, had reported his whole platoon had been lost.

“They Called Us ‘Lucky’: The Life and Afterlife of the Iraq War’s Hardest Hit Unit,” co-written by Gallego and Jim DeFelice, was published last November by the HarperCollins Publishers imprint William Morrow. Gallego, a Democrat first elected in 2014, is a Marine Corps veteran who was deployed to Iraq in 2005 and served with Lima Company, which in eight months lost 22 Marines and a Navy Corpsman.

In the book, Gallego alleged that Knickmeyer had mistakenly given the impression that the entire Lima platoon had been killed in a single battle. Four, as correctly reported by Knickmeyer, were lost when an explosive device erupted under their Amtrac. They were “the last battle-ready members” of an individual squad, but not the whole company.

In “They Called Us Lucky,” the authors blamed Knickmeyer for causing unneeded hardship back home. They allege that Knickmeyer's story was “indicating everyone was dead” and that she had mistakenly heard someone say the platoon “was wiped out.”

“We may have been ‘wiped out’ in the sense that we were deeply shaken by the deaths of our friends. The way the story made it seem, though, was that an entire platoon of Marines had been killed," Gallego and DeFelice wrote. "The story had already been published on the web. In the connected world we live in, that meant our families were now grieving our loss.”

The new passage reads in part: “It turned out that Ellen Knickmeyer, who worked for the Washington Post and was covering the operation, had filed a story that accurately reported a squad had been killed or wounded. But it was apparently being misinterpreted by our loved ones back home to mean that the entire platoon was wiped out.”

William Morrow announced the correction in a Twitter post earlier this week, saying "Knickmeyer accurately reported casualties to one squad, not the full unit."

A spokesperson for Gallego wrote in a statement Friday that while the congressman considers “this matter resolved,” he was not offering an apology.

“Ruben Gallego’s shock as he experienced it in that moment of understanding her reporting, is not something that he can erase and apologizing for his emotional reaction and trauma, and the retelling of it in his book, is not appropriate.”

Knickmeyer has been at the AP since 2014 and also worked there from 1990-2005. She currently is based in Washington, D.C., and covers foreign policy, national and international security and climate change.

Knickmeyer said in response to the statement from Gallego's spokesperson: “The publisher and his co-author did what he didn’t, which is acknowledge the account he wrote in the book was fictional, and set the record straight publicly, as ethics require.”