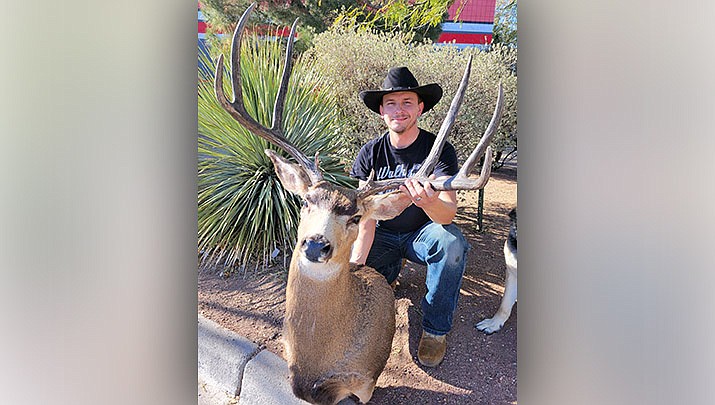 Jeremy Osborn of Phoenix poses with the mount of a buck he took in the Kaibab peninsula, which was mounted by Kingman taxidermist Amber Kirby. (Photo by Don Martin/For the Miner)

KINGMAN – A year or so ago fellow guide Hogan Roberts and myself were fortunate enough to assist a pair of disabled veterans on an early Kaibab deer hunt. The hunts were through the Arizona Elk Society’s Heroes Rising program.

Hogan’s hunter was a Native American from the Hopi tribe and they were able to take a fine buck during the opening weekend of the hunt.

My hunter, Jeremy Osborn, who was from Phoenix, unfortunately was only going to be able to hunt the last few days of the hunt.

It was a challenge for sure, but on the last day of the season Osborn took a really wide 3x3 buck that he said was the largest mule deer buck he had ever taken.

I assumed that he was going to have the buck mounted, since it was his best buck to date, but he surprised me when said he probably wouldn’t have it mounted, as it would be a financial burden to him and his family. Osborn is married and has two children. “Maybe I’ll get a European mount,” Osborn said.

I decided that I couldn’t allow this veteran, who has given so much in the service of our country, to not have his special buck mounted and displayed forever in his home.

I had an idea, and I told him to leave the head and cape with me, that I knew a taxidermist in Kingman that would give him a special deal. Osborn asked if he could maybe make payments and I told him I was sure he could.

Of course, the entire time I was thinking about Kingman taxidermist Amber Kirby, owner of Down and Mount Taxidermy here in Kingman. Kirby has done mounts for several of my previous disabled veteran hunters. Kirby does a fine job and doesn’t charge the vets for her time and talent, only receiving what the cost of the materials are.

Then I had another idea. Would there be sportsmen in Kingman who would be willing to donate to pay for those materials, so there would be absolutely no cost to Osborn?

I first contacted Kirby who willingly agreed to do the mount for materials only. Then I put out a call on social media and explained the situation to those that follow my posts on Facebook.

The reaction was awesome with six area sportsmen, including myself, offering to make a cash donation to pay for all of the materials needed. One area resident, Scott McCoy, who doesn’t even hunt, offered to pay the entire amount if needed, but I told McCoy that others in the community were going to make donations.

Once I had everything in place to take care of the cost of the mount, I called Osborn and told him that things had changed and he was going to receive a shoulder mount of his buck that Amber and a few local sportsmen had paid for.

Osborn was taken back by the generosity of this community. “They don’t even know me,” he said. I told him that while that was true, they knew what he had done and the sacrifice he had made for our country, and they were grateful.

Fast forward to December when I learned that Osborn was coming to Kingman to pick up the mount.

I spoke with Kirby who told me that she was no longer taking in animals at her studio, that she had developed a serious medical condition that she was dealing with. But Kirby assured me the mount was finished and ready to be delivered to Osborn.

As it turned out Osborn was delayed in his trip to Kingman, so he was unable to meet Amber in person. I volunteered to pick up the mount and deliver it to Osborn.

The mount looked wonderful, and when Osborn saw it, he was quiet for a minute. “I really wish I could have met Mrs. Kirby in person to thank her for doing an awesome job on this buck,” Osborn said.

Then Osborn said that he was so grateful to those in our community that had helped in getting his buck-of-a-lifetime mounted.

This is an example of how the sportsman community in Kingman is willing to help out others who are in need.

This isn’t the first time that when the call for help went out that those in our community responded.

They’ve done it before, and if needed again, will step up once more. Thanks again to Amber Kirby and those that made this special gift possible.

These actions make me proud to be a sportsman and a member of the Kingman community!