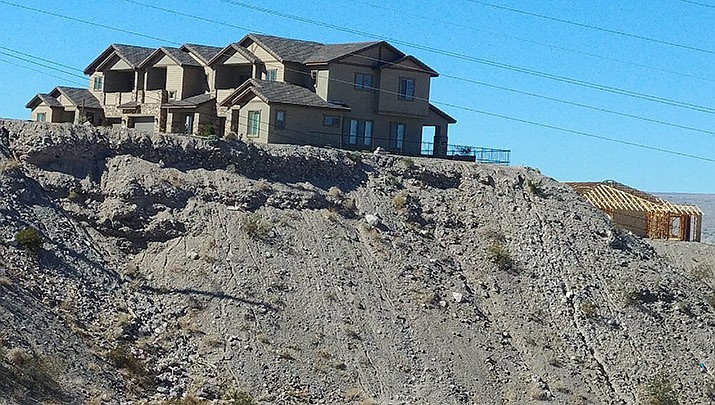 This photo shows recent construction in Mohave County at the edge of a mesa. (Photo by Luis Vega/For the Miner)

The loss of human life is always tragic. It is most shocking when it’s caused by a natural event on a scale that’s incomprehensible to humans such as an earthquake, a landslide or a flash flood. There’s nothing a human can do that will stop the forces that cause these events. They can only get out of the way, if possible.

In 1983, after a heavy snowpack in the mountains, the railroad tracks and highway that passed through the small town of Thistle, Utah, started to buckle. On April 17, the town was given two hours to evacuate. That night the hillside gave way, sending a mudslide that buried the entire town. Luckily, no one was hurt but the town was a complete loss and today lies as a half-buried ghost town.

Forty-three people were lost in the mudslide of March 22, 2014, near the town of Oso in Washington state. An after-action report that investigated the area found that geologists had discovered evidence of previous mudslides in the geologic past and had warned state authorities of the potential of future mudslides.

In my estimation, the city with the greatest potential for a natural disaster of tremendous size is not Los Angeles, although it’s high on the list. It’s Seattle, Washington. Geologists have found evidence of numerous lahars in the recent past emanating from the slopes of Mt. Rainier and crashing through the present site of Seattle – stopping only when they reached the sea. A lahar is a mudslide filled with rocks, trees and whatever is in its path that forms because of a volcanic eruption that instantly melts millions of gallons of water held in the form of snow on the volcano’s slopes. A lahar can flow as fast as 100 miles an hour down the mountain, not giving much time for warnings or evacuations.

Mt. Saint Helens was a precursor of what can happen. Luckily, the force of the eruption and the lahar went to the east, away from population centers. It would’ve been a different story had the eruption gone to the west.

Gravity is a powerful force. All things that are above us have the potential to be pulled down on top of us by gravity. There are homes being built and some already built that are below cliff faces. The number of large boulders that have rolled down the cliff face prove that boulders occasionally break free from the cliff and tumble down. When will this happen again? No one knows. It could be tomorrow or it could be in 100 years. That’s why many people don’t heed the warning nature gives us and are willing to take the gamble.

Along the Colorado River, in Mohave Valley, are mesas that overlook the valley. These make for home sites with great views, especially the ones right on the edge. These mesas are made of alluvium cemented by caliche. As the houses are built and the residents put in landscaping that requires watering, the water might seep into the alluvium, weakening the caliche cement. Eventually, gravity will win and the alluvium will erode. When will this happen? Hard to tell. it depends on the amount of watering, the steepness of the cliff and the amount of rainfall that infiltrates the sediments. Again, people are willing to take the gamble.

The retention basins seen around Kingman are a great way to help control runoff. The one at Southern and Eastern, the “green hole,” prevents runoff from flooding homes and makes a great place for kids to play soccer. It also helps with water infiltration to help put water back in the aquifer. I have a small retention basin in my front yard to catch runoff from my property. My landscaping doesn’t need a drip system and the Joshua trees are doing great!

It’s human nature to ignore the warnings from the scientific community when it comes to something that might happen in the future. Geologic hazards are a fact of life. We ignore them at our peril and, if nothing happens during our lifetime, we’ve gambled and won. Just don’t tell that to the people of Oso, Washington.