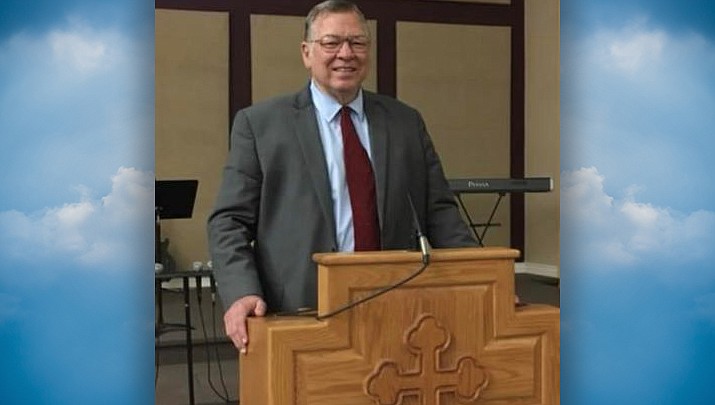 Paul was born in Wright City, Oklahoma on Aug. 29, 1946 to Noble and Hazel Daniel. In 1968 he graduated from Grand Canyon College in Phoenix, Arizona. He graduated with a Master’s of Divinity from Southwestern Baptist Theological Seminary in Fort Worth, Texas in 1972. He served 46 years in the pastorate in Texas, Washington, Louisiana, Arkansas and lastly, 26 years at First Southern Baptist Church in Kingman, Arizona.

Paul’s greatest passion was helping people find a personal relationship with Jesus Christ. He demonstrated his love for God, family, others, and country with a gentle, humble and patient demeanor. Paul was a great listener. His kindness and compassion drew people to him. To know him was to love him!

Paul is preceded in death by his parents, Noble and Hazel Daniel; his brother, Jack Daniel; and his granddaughter, Jordan Daniel. He is survived by his wife, Anna Daniel of 54 years; and their four children, Stephen (Kristie) Daniel, Mark (Susan) Daniel, Philip (Misty) Daniel and Michelle (Shane) Milligan; eight grandchildren and five great-grandchildren, with a sixth on the way; and siblings (Karen) Daniel, James T. (Sue) Daniel, Robert (Debbie) Daniel and Marcia Daniel.