2 hurt in ultra-light crash near Kingman 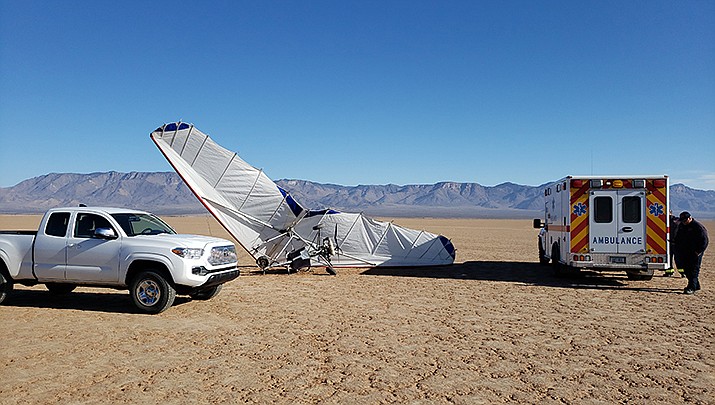 This ultra-light aircraft was damaged and the pilot and passenger were injured when the plane crashed while attempting to take off at Red Lake near Kingman on Wednesday, Jan. 19. (MCSO photo)

RED LAKE – A two-seat ultra-light aircraft crashed during takeoff at Red Lake, injuring the male pilot and his male passenger.

The accident occurred at about 9:30 a.m. Wednesday, Jan. 19, according to a news release from the Mohave County Sheriff’s Office.

The sheriff’s office said the plane veered to the left while attempting to take off, causing the wing to strike the ground, which pitched the hang-glider style aircraft into the dirt nose first.

According to the news release, the pilot suffered a broken left leg, while the passenger sustained a broken right arm. The men were transported to Kingman Regional Medical Center by Lake Mohave Ranchos ambulance for treatment.

The sheriff’s office wrote that both men were wearing helmets and were properly fastened into the aircraft.