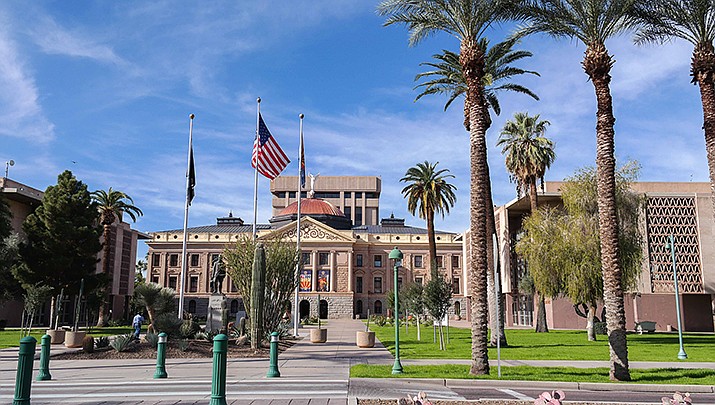 A new law proposed by the Arizona Legislature would prohibit school district’s from spending tax dollars to join the Arizona School Boards Association. The state Capitol building in Phoenix is pictured. (Photo by Visitor7, cc-by-sa-3.0, https://bit.ly/3o0fG5x)

PHOENIX – The Arizona School Boards Association, which successfully sued the Arizona Legislature to invalidate key parts of the state budget last year, is now being targeted by Republican lawmakers who have long opposed its efforts to lobby for local school boards.

A Republican-controlled state Senate committee on Tuesday advanced a bill that would ban the more than 200 school boards that are association members from using taxpayer money to pay yearly membership fees.

The sponsor, Republican Sen. Kelly Townsend, said it is just wrong for tax dollars to be spent lobbying for partisan issues at the Legislature.

Townsend and Republicans on the Senate Education Committee also pointed to a letter sent this summer to President Joe Biden by the national school boards group as a key driver of the legislation. The letter asked Biden to use federal law enforcement to crack down on the growing number of threats against school board members from parents who opposed mask mandates and other COVID-19 restrictions.

The wording of the National Schools Boards Association letter led to national blowback against the group and its state members, some of which quit the organization even after it apologized.

Republican Sen. Paul Boyer, who chairs the Senate committee, sparred with the association's lobbyist over why the organization did not end its affiliation with the national group. Boyer pointed to the letter's request for Biden to invoke terrorism laws to go after parents who threatened board members.

“You said the speech was problematic,” Boyer said to Chris Kotterman. “Certainly, likening parents to domestic terrorists is more than problematic.”

Kotterman agreed, noting that the letter's language was an “extreme problem."

But Kotterman, school board members and people who testified Tuesday said removing the association's funding would leave school boards without the training, insurance and many other services it provides members because of an ill-advised letter that prompted public blowback.

It also would leave elected school boards without a unified professional voice at the Legislature.

"If we have the ability to weaponize legislation against the people or groups that we have philosophical differences with, I think we are going down a very slippery slope," said Craig Hazeltine, a Scottsdale resident who testified against the bill. “I believe it takes us ... to a place of retribution and disdain that we shouldn't (go to)."

In the background is the lawsuit the association filed last year against four state budget bills that members opposed partially because they barred school boards from adopting mask mandates and other COVID-19 restrictions. The association won, with the Arizona Supreme Court ruling that the Legislature unconstitutionally packed the budget with unrelated policy items.

“I would like to remind the committee here today that ASBA has weaponized many bills against parents and families,” parent Merissa Hamilton told the panel. “Last year when this Legislature passed bills to protect the parental rights and medical freedom of our students, they sued so that those bills would be thrown out.”

She said bill provisions that were blocked put thousands of families opposed to those rules at risk of losing their livelihoods. She was one of several parents who testified in favor of the legislation.

Many public organizations that are affected by legislation are members of groups like the association that provide resources and advance their priorities at the Legislature. Townsend said she eventually wants all of them blocked from using public money to lobby.

Townsend pointed to a series of school board association positions opposing Republican legislative proposals to justify targeting the group.

But Jill Humpherys, a Gilbert Public Schools board member, said she and her district have benefitted greatly both from the association's services and from its advocacy at the Legislature.

“We as school boards need to be able to lobby at the Legislature for our priorities,” Humpherys said. "We set our political agenda together at the delegate assembly, and we all vote on it.

“And so if you take away opportunities to lobby, then you take away the voice of our districts and our children and our families,” she said.

Townsend said she also wants to target groups like the League of Arizona Cities and Towns, which lobbies under direction of its members.

“This is a Step One in the efforts to remove taxpayer dollars being used by an organization that has a partisan bias,” Townsend send.

The committee approved the bill on a 5-3 party-line vote, and it now goes to the full Senate for consideration.