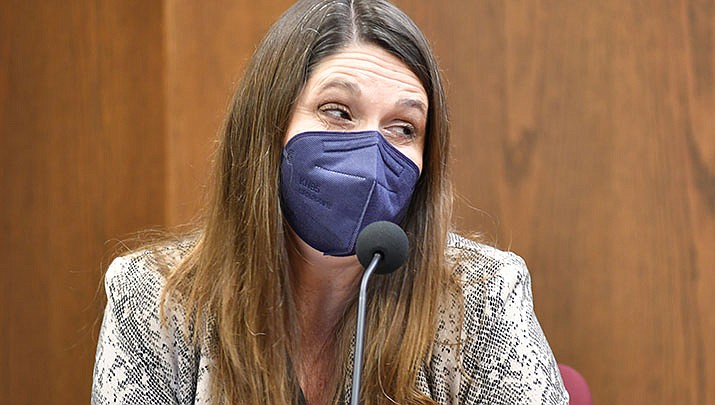 State Sen. Stephanie Stahl Hamilton tells Republican colleagues they are mistaken thinking that those born male are inherently stronger or better at sports than females, even challenging them to a one-on-one basketball game. (Photo by Howard Fischer/For the Miner)

PHOENIX – Rejecting pleas from parents of transgender children, a Senate panel voted Thursday to limit their participation in public or private school sports to the biological sex of their birth.

The 4-3 party line vote by the Republican dominated Judiciary Committee came after Matt Sharp, an attorney with Alliance Defending Freedom, cited instances in Connecticut where transgender females defeated ciss-gender girls and women in sports. He said those born male have a biological advantage over girls.

Sharp, however, could not cite a single instance of problems in Arizona. But he said that's irrelevant.

"We're trying to prevent what happened in other states from happening here,” Sharp said.

The Arizona Interscholastic Association which governs high school sports already has a policy that says all students should be able to participate "in a manner that is consistent with their gender identity, irrespective of the sex listed on a student's eligibility.”

AIA lobbyist Barry Aarons said there have been only a dozen requests in the past seven to 10 years to allow students to participate in a sport in the gender with which they identify when it does not match that of their birth. And he said the AIA's Medical Sports Advisory Council which reviews these has granted just seven.

The measure requires each interscholastic or intramural athletic team sponsored by a public or private school whose students or teams compete against a public school to be expressly designated as for males, females or coed "based on the biological sex of the students who participate on the team or in the sports.” And it specifically prohibits teams designed for females from being open to males.

It also says any student or school who suffers any harm from violation of what's being called the Save Women's Sports Act can file suit to both halt the practice and collect damages.

SB 1165 picked up support from several speakers who said that allowing those born male to compete against girls and women isn't fair. That includes Jadis Argiope who identified herself as a transgender woman who said all the measure does is deal with "biological reality.”

"The reality is we're stronger,” she said.

`We have bigger bones, we can take in more oxygen,” Argiope continued. "We have a better fat distribution that gives us an advantage taking hits. We have stronger ligaments.”

Christine Pierce cited her own experience in sports.

"Allowing males to compete against females takes away the fairness of competition in female athletics,” she said.

But Vanessa Anspach said she sees it from the perspective of the parent of two children, including a 10-year-old transgender girl.

"When I became a parent I never imagined I'd be standing here today begging you for my child's right to be a child,” she testified. "As a parent, my job is to support her, defend her and be her advocate.”

Anspach said she knows her daughter will face multiple challenges.

"Playing sports with her peers shouldn't be one of them,” she said.

Albert Levensohn had his own story.

"I am the proud parent of a transgender girl in middle school who deserves all the rights and opportunities to play sports just like all other girls growing up in Arizona,” he told lawmakers. And Levensohn said that those who are backing the measure are wrongly focused on who wins.

"Participating in sports is an important part of students' physical, social and emotional well-being,” he said. "Playing sports provides student athletes with important lessons about leadership, self-discipline, success and failure as well as the joy and shared excitement of being part of a team.”

But Sen. Warren Petersen, R-Gilbert, said the measure does not discriminate but simply recognizes biological differences.

"It is absolute lunacy to think that it's OK to allow a male to dominate in a female sport,” he said. And Petersen said nothing in the legislation precludes transgender students from doing that.

"They can play,” he said. "They just can't play on the team they want to play on.”

He suggested that one option would be for schools to create "transgender leagues.”

That suggestion, however, drew questions from Sen. Martin Quezada, D-Glendale, who questioned whether Petersen was advocating a form of "separate but equal,” a concept the U.S. Supreme Court rejected in the 1950s when it disallowed schools from being segregated because of race.

Sen. Wendy Rogers, R-Flagstaff, cited her own experience playing high school volleyball and participating in track and field competition in college, all of which came about because of federal Title IX which prohibits any institution from discriminating against individuals on the basis of sex in education or programs.

"If men had been on my team I would not have signed up,” she said.

Sen. Stephanie Stahl Hamilton, D-Tucson, said all that is based on what she believes is a mistaken premise that men, by definition, are stronger than women. In fact the senator said she would like the men on the committee to stand up with her.

"There is not a man on this dais whose physical appearance I find intimidating,” said Stahl Hamilton who said she stands 5-foot-10 in her bare feet – and 6 feet with heels.

"I would take any one of them on on the basketball court any given day, and would have done it as a 14-year-old girl,” she continued. "And, in fact, I did.”

The measure now goes to the full Senate after constitutional review by the Rules Committee.