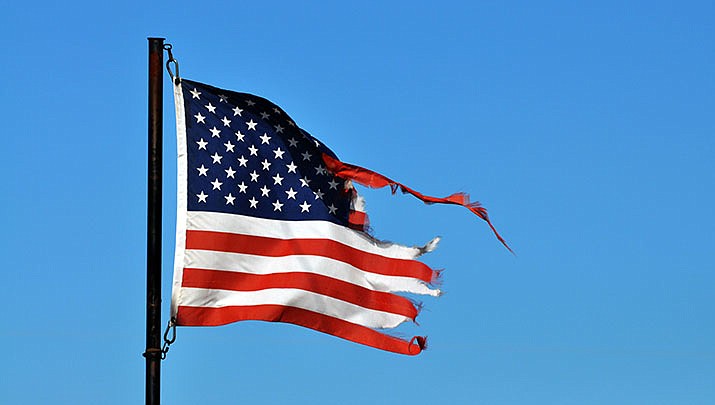 Tattered American flags should be taken down and respectfully disposed of. (Photo by Butch Meriwether/Kingman Miner)

There are many Mohave County residents who believe they are patriotic by flying American flags to show their support, respect and pride in America.

However, after “running” the flag up their poles, it is sad they quickly forget they are there.

When people choose to fly the American flag, they must remember no disrespect should be shown to the flag.

It is conservatively estimated that more than half of the American flags being flown in Mohave County should have already been replaced due to them being worn and tattered. Many residents are unknowingly violating the provisions and spirit of the U.S. Flag Code.

Old Glory is the great emblem and symbol of our nation and the essence of freedom. It represents a living country and is itself considered a living thing.

The U.S. Flag Code is a guide for all handling and displaying of the Stars and Stripes. The federal government does not impose penalties for misuse of the United States flag. There are no flag police, but common sense should and must prevail.

The biggest violation of flag etiquette observed within Mohave County is when individuals, county buildings and businesses choose to fly the flag when it is in such condition that it is no longer a fitting emblem for display. This is the time when Old Glory should be replaced with a fresh new one and the tattered flag destroyed in a dignified way, preferably by burning.

People personally don't have to destroy the old, tattered flag. Most service agencies and fraternal organizations within Mohave County are willing to provide a fitting disposal of all American, state and POW flags.

There are some basic laws covered in the United States Code, Title 4, Chapter1 that govern how the American flag should be displayed.

It is the universal custom to only display the flag from sunrise to sunset on buildings and on stationary flag poles in the open. However, when an individual wants to fly the flag 24 hours a day to show his or her patriotism, it should be properly illuminated during the hours of darkness. That doesn’t mean they have to have a 500 watt light shining on it; it just says it should be properly illuminated.

When the flag is hoisted onto a flag pole, it should be run up briskly and lowered ceremoniously (slowly).

On Memorial Day, the flag should be displayed at the half-staff position only until noon, and then raised to the top of the flag pole.

The flag should never be displayed with the union down, except as a signal of dire distress in instances of extreme danger to life or property.

And last but not least, when our residents choose to fly the Stars and Stripes, they should display it properly and let all know they are full of pride and patriotism.

For more information about Old Glory and the proper respect it so justly deserves, visit http://www.aflag.com/us_code.asp.