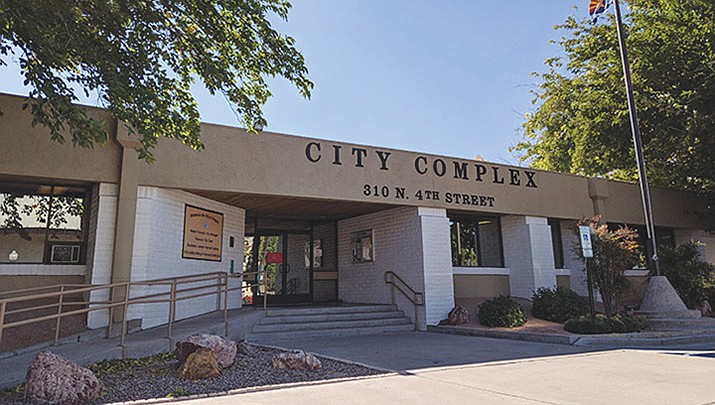 Kingman City Council could decide to place a sales tax increase on the Nov. 8 election ballot when they meet on Tuesday, July 5. The city complex at 301 N. 4th St. is pictured. (Miner file photo)

KINGMAN – The funding source for the pavement preservation project may be on Kingman voters’ Nov. 8 ballots.

According to the agenda, the sales tax is being considered due to tourism, which is a primary avenue for Kingman’s sales tax collections and enables visitors to foot part of the bill. At the May city council workshop meetings, staff also pitched a property tax.

However, the sales tax would also collect funds from tourists who are also using the roads. At the meeting, council could consider including a “big-ticket” option for taxable items.

If approved, the city would collect around $5.5 million annually over 10 years, which will be used to repair, maintain and improve city streets. According to the agenda, the recommended tax increase is 0.52%.

To fix and maintain current paved streets, city staff has proposed a seven- to 10-year plan to fix paved city streets. Almost 50% of the network roads are considered “poor.” Staff has expressed the goal of getting the average of all residential roads to a pavement condition index of 70 out of 100.

To establish and maintain a pavement preservation program, the total 10-year cost would be over $100 million. The city’s general fund, Highway User Revenue Fund and restaurant/bar funds would also help pay for the program.

Council will also decide whether to accept a grant from the Arizona Criminal Justice Commission awarded to the Kingman Police Department on behalf of the Mohave Area General Narcotics Enforcement Team. The grant amounts to $336,832 with a match of $84,208 required.

In February 2021, council hired Ritoch-Powell & Associates to prepare plans for the Eastern Street Design Phase One, which are 90% complete. Council will decide whether to make a contract amendment to redesign the traffic signal for video detection cameras.

The original plan was to install inductive loop vehicle detection for signal control at the new intersection of Airway Avenue and Eastern Street. The upgrade cannot exceed $4,750 in cost. The budget includes $85,000 for the project.

Also on the agenda, council will hear reports on the Mohave County Fairgrounds. County staff proposed moving the fairgrounds to the Golden Valley area, which has received mixed reviews from community members. The proposed acreage is 376 acres, more than the 76 acres the current facility sits on.

The Mohave County Board of Supervisors recently created a Fairground Needs assessment committee of fairgrounds stakeholders to determine its needs. However, committee members said that may not be big enough, noting the rodeo space alone could take up 200 acres.

The City of Kingman’s water comes from a sub-basin of the aquifer. A U.S. Geological Survey study found, and Mohave County data confirmed, that new farms in the area are causing a water deficit.

The findings from the USGS highlighted that 5,600 acre-feet of water was being pumped out, but not being recharged back into the basin. One acre-foot equals about 326,000 gallons of water. The 2017 study, published in 2021, observed a 30,900 acre-foot deficit annually, a massive jump from previous findings.

A 1,200-foot water level has been established as an “adequate assured” water level. However, if it reaches that level new wells would soon be needed to reach a 2,000 foot depth. The water could reach the 1,200-feet water level in 50 to 140 years depending on what steps are taken to address the water deficit.