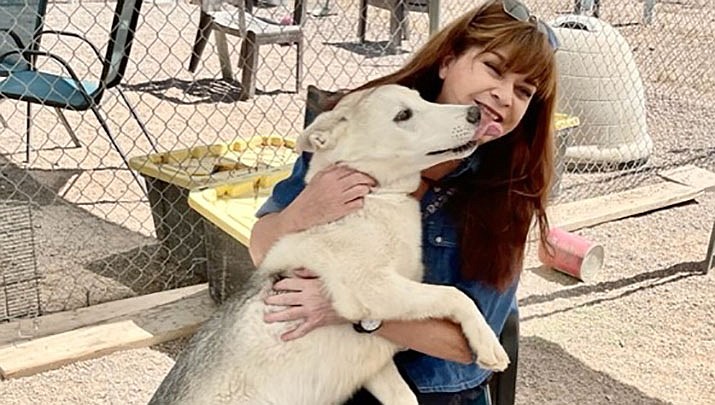 KINGMAN – The day-to-day job with Mohave County for Nicole Mangiameli is often emotional and difficult. Fortunately, it’s also rewarding and filled with a sense of accomplishment.

Mangiameli is the Mohave County Animal Shelter manager and must deal with an ever-changing influx of all types of creatures who have found themselves trying to survive in a desert environment and hopefully be relocated to a new and welcoming home.

The task is daunting. There are more animals than future forever homes and some wonderful, loving pets never make it outside of their shelter environment. Mangiameli and her staff do the best they can in an outdated and cramped facility knowing a large, new shelter is on the horizon.

Mangiameli says she doesn’t remember a time when she wasn’t obsessed with animals. She grew up in Orange, California, a town with an almost idyllic and rural feel, spending time riding horses and training dogs.

Her parents could be overwhelmed as she brought home birds, rats, lizards, turtles, cats and dogs, begging to keep one and all. She was an active member of the 4-H club starting at age 12 and frequently competed with her horse and dog at local shows.

After high school, she worked for a large veterinary hospital, using cutting edge surgeries and treatments. Her lifetime of working with animals never ended.

Mangiameli was previously married to the principal director of the highly successful Married With Children television series and even worked as the assistant animal trainer on the show with famed trainer Steven Ritt and regular series dog, Buck Bundy.

One episode (Wabbit Season) even starred her own trained rabbit. Over the years she continued working in animal hospitals, with over 40 doctors overall, and was always eager to expand her knowledge of animal nutrition and health.

Although she had memorable experiences living in England and France six years ago Mangiameli moved to Kingman to be closer to her parents who live in Lake Havasu. She was hired in 2018 as the manager of the Western Arizona Humane Society in Kingman and was immediately in sync and in love with the shelter, her staff and its wide-ranging non-human clients and temporary residents. In July 2019, management of the shelter returned to Mohave County. Some good news would soon follow. The county board of supervisors approved a sorely needed new shelter. It’s now expected to be in place by late summer of 2023.

Make no mistake about it, saving the lives of the animals in the overcrowded shelter is not an easy task. Many animals never receive that desperately wanted forever home. Their stay is reasonably short in either a good or bad way.

Right now, the shelter is especially filled with an abundance of dogs. They include many mixed breeds, big and small, and a quick visit by any animal lover shows most are happy and loving and waiting for that ultimate rescue.

There are also those whose countenance reveals a sense of hopelessness, sad for all to see. Mangiameli says “the shelter staff is deeply committed to saving every animal we can and providing the best possible environment for our shelter guests while they are with us.”

Mangiameli points out that “people often ask how we at the shelter can do such a difficult and heartbreaking job. Well, we don’t see it that way. It’s watching our special shelter guests walk out the door with their new families that fills our hearts with joy. It’s seeing these beautiful animals go from homeless to healthy and happy. That’s what drives us every day. With the incredible support from our many volunteers and all the county departments working together, we have made positive change in the lives of Mohave County animals.”

Mangiameli’s right. Pets can have a much happier life for themselves as they head to new surroundings, but it can change the lives of their human counterparts as well. It’s finding and connecting the two that can be terribly frustrating. The shelter at 950 Buchanan St. in Kingman is open from 10 a.m. to 4 p.m. Mondays through Saturdays.