Kingman-area Experts: Social media makes it easier for kids to get drugs 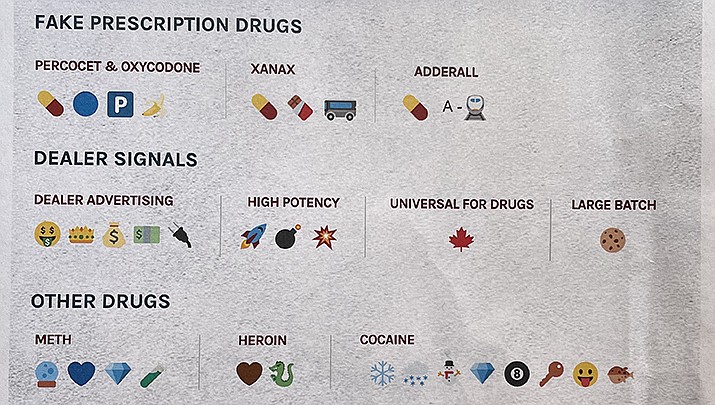 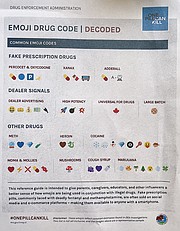 Shurie Minter of the Mohave County Health Department held a presentation designed for parents and teens to understand the signs of drug purchases over social media and to present the dangers of doing so, including counterfeit drugs.

Held at the Kingman Police Department at 2730 E. Andy Devine Ave. on Tuesday, July 12, Minter said while social media itself is not bad, it is not exempt from potential dangers. The presentation focused on Snapchat, but Instagram and TikTok were also referenced.

“Snapchat itself is not bad itself,” Minter said. “However, just like other social media apps, it does have dangers unique to the platform.”

Snapchat is a favorite among teenagers due to its self-destructing messaging. Once the message or picture on the app is open, it deletes after one to 10 seconds. People can also talk to random people via Snapmaps.

Through Snapmap, posts can be seen anywhere in the world and not just via the approved friend list. Minter said it has become much easier for individuals to sell and purchase drugs. People also don’t have to put their names as their usernames, which adds a level of anonymity.

Without a warrant from the police, Snapchat does not have to turn over information about an account. If there is a warrant, it can take up to six weeks for the information to be turned over to law enforcement. However, it can still be challenging to identify the individual behind the account.

If an individual responds to a post on Snapmaps, the seller can simply ask for the address to drop the purchase off. Through apps like Venmo, PayPal and more, payments can be made with a click of a button.

“Basically, this is how some youth nowadays are connecting with individuals that they otherwise would not know,” Miner said. “And this is potentially how they can obtain dangerous drugs.”

DeVries shared a recent incident where a Kingman teenager bought Xanax for a parent. However, the pill was fentanyl, not Xanax, and the parent did not wake up the following morning.

He stressed that what individual purchases may not be what they get. In 2021, the Centers for Disease Control and Prevention reported over 100,000 drug overdoses, a 28.5% increase from the year before.

“We've had situations here in the community of fatal overdoses with counterfeit pills,” DeVries said.

Drug purchases through social media have become more popular due to convenience. Through hashtags and emojis, anyone can secure a purchase within minutes. However, even if someone purchases a specific drug it does not guarantee it's the drug they’ll receive.

“The latest DEA (U.S. Drug Enforcement Administration) percentages that they’re indicating on the counterfeit pills, 42% of the pills being seized right now have a fatal dose,” DeVries said.

Minter shared national and local news stories of kids who have died from fatal overdoses after purchasing drugs on social media. According to Snapchat, individuals have to be at least 13 to join the app, however, there are workarounds.

Issues other than drugs

“Sextortion is the practice of extorting money or sexual favors from someone by threatening to reveal evidence of their sexual activity,” Brown said. “So that could be sexually explicit photos of a minor, or it could even be sexually explicit text messages back and forth with a minor. It is important to remember that any of those happening with youth under the age of 18 is considered child pornography.”

“That self-destructing feature on Snapchat I think is even more pertinent for nudes as well,” Brown said. “They (drug purchasing and selling) coincide together and make Snapchat scary.

Working towards stopping the problem

Minter said the potential dangers are scary and overwhelming, so parents need to take the time to educate themselves on social media and its potential dangers. Most importantly, it’s crucial for parents to build trust with their kids.

To avoid the dangers of social media, parents need to become more involved while also creating a safe place for children to talk and ask questions. To become more involved, Minter said as a mother she has Snapchat so she can understand the context of its potential dangers.

“Be more involved, even if that means online,” Minter said.

While it may seem like common sense, Minter said it’s important to have open and honest conversations with their kids. She also said parents can create a game plan with their kids if they do find themselves in a dangerous situation.

For example, Minter gave a scenario where a son had codewords with his father to know he needed a parent to come to pick him up from a dangerous situation. By having the discussion beforehand and building trust, the child felt comfortable calling his dad when he was put into a situation he wanted out of.

“Be safe, be proactive, constantly remind your teen that they have a strong support system at home,” Minter said. “Actively listen to their thoughts and comments. Again, really, it's just opening up that conversation and making it comfortable for them to be able to come to you.”