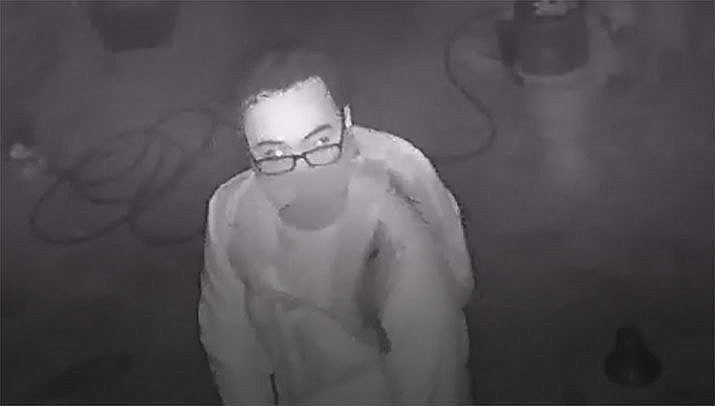 MCSO detectives are seeking the public’s assistance in locating the suspect of a double homicide that took place on Tuesday, June 28. The suspect, shown here, is described as a white male with dark hair and glasses. (MCSO photo)

According to an MCSO news release, detectives collected and sent off items of evidentiary value, and are awaiting the results of analysis testing from an outside lab. Detectives have received multiple suspect leads that have been investigated and excluded.

The suspect may have received an injury to their left shoulder area and should have an obvious wound in that area. Additional video surveillance is being released in an attempt to assist with identifying the suspect.

MCSO noted that this information was not immediately released, as it was used to assist detectives in determining the legitimacy of information received and maintain the integrity of the investigation, according to MCSO.

MCSO responded to the June 28 homicide in the 9200 block of E. Dilligaf Road. The subject is described as a light-skinned male with dark hair, approximately 20 to 30 years-of-age, 5’6 to 6’0 in height, and weighing 150 to 170 pounds. The subject also appeared to be wearing glasses.

Anyone with information related to this investigation is asked to contact the Mohave County Sheriff’s Office at 928-753-0753 or 1-800-522-4312 and reference DR# 22-024010. Surveillance images can be viewed and downloaded at https://www.facebook.com/MohaveCountySheriffsOffice.