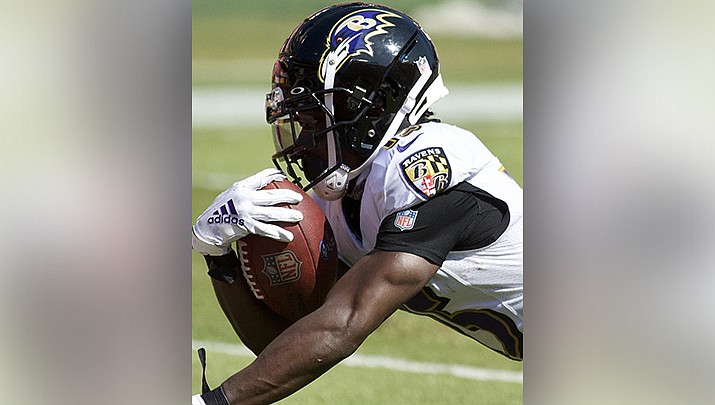 The Arizona Cardinals are hopeful that newly acquired receiver Marquise Brown won't miss much time with an injured hamstring. Brown is shown in action last season with the Baltimore Ravens. (Photo by All-Pro Reels, cc-by-sa-2.0, https://bit.ly/3J7wxiU)

GLENDALE – The Arizona Cardinals are hopeful that newly acquired receiver Marquise Brown won't miss much time with an injured hamstring.

The team put Brown on the active/non-football injury list on Tuesday, meaning the receiver counts toward the 90-man preseason roster but can't practice or play until he's removed from the list.

“We’re just being precautionary,” Kingsbury said. “We know when he practices, he practices hard. He’s going to put in the work. So we want to make sure when he comes back, he’s full strength.”

Brown's health is crucial because the Cardinals are counting on him to fill the void left by DeAndre Hopkins, who will miss the first six games of the season after violating the NFL's policy on performance-enhancers.

The Cardinals acquired Brown and a third-round pick from Baltimore during the draft in April, sending the No. 23 overall pick to the Ravens in return. Brown caught 91 passes last season for 1,007 yards and six touchdowns, big numbers in the run-heavy offense that Baltimore prefers.

Arizona's more wide-open approach could boost Brown's production. He already has a rapport with Cardinals quarterback Kyler Murray after the two played together in college at Oklahoma.