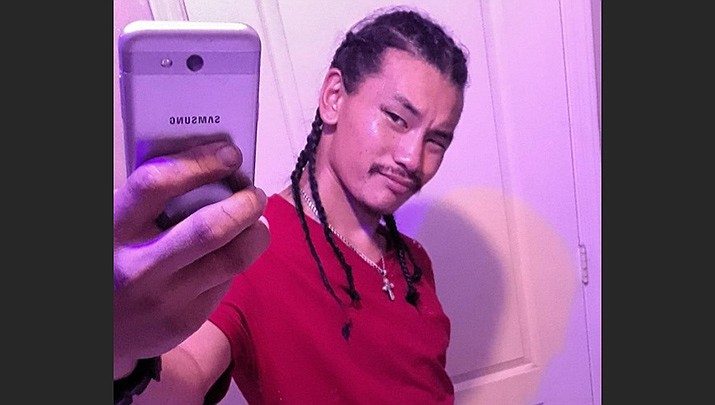 Jeffrey Byung Hwi Glinos, 28, of Golden Valley, a suspect in a weekend homicide in Golden Valley, has been taken into custody in Surprise, Arizona. (MCSO photo)

KINGMAN – Jeffrey Byung Hwi Glinos, 28, a suspect in a Golden Valley homicide that occurred over the weekend, has been apprehended.

On Wednesday, July 27, detectives with the Mohave County Sheriff’s Office received information that Glinos was in the area of the 12000 block of W. Rimrock Street in Surprise, Arizona. According to an MCSO press release, detectives contacted the U.S. Marshals Service Task Force in Glendale and requested their assistance in locating Glinos.

Deputies and officers with the Marshals Service Task Force in Glendale responded to the area and were able to locate Jeffrey Glinos getting into a vehicle. Glinos was contacted and taken into custody without incident.

The homicide occurred on Sunday, July 24 in Golden Valley. The deceased victim of the shooting was identified as Michael Ryan Walker, 33, of Golden Valley. The name of the second victim, who was treated for a gunshot wound to the hand, has not be released.

On Sunday, deputies responded to the 4200 block of W. Mazatzal Drive in Golden Valley to a report of two subjects that had suffered gunshot wounds.

Shortly after, one of the subjects was pronounced dead from a single gunshot wound to the chest. The second subject was shot in the left hand.

MCSO detectives assumed the investigation. Although there is conflicting accounts of the incident, it was found that the incident had occurred at a residence located in the 1200 block of S. Colorado Road in Golden Valley.

Involved parties reported the two subjects had come to the residence on Colorado Road and a confrontation occurred inside. According to law enforcement, the two subjects allegedly attempted to gain access to a bedroom, at which time a single gunshot was fired at the two from within the bedroom, striking the both.

The two subjects were then reportedly transported out to a remote desert area. They were ultimately transported to the Mazatzal Drive address where law enforcement and medical personnel were contacted.

Detectives served a search warrant at the residence on Colorado Road. The investigation continues.