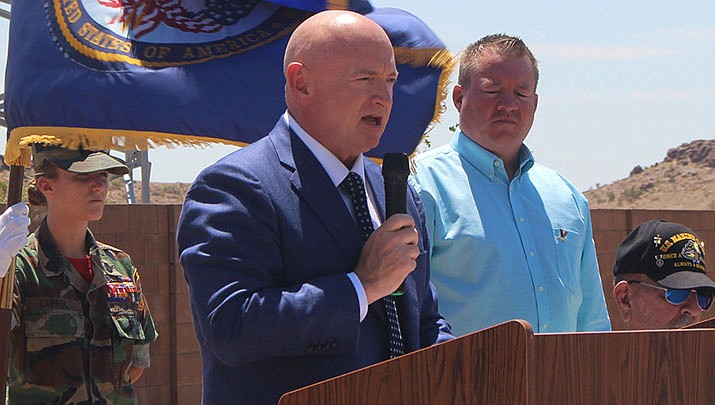 A bill proposed by U.S. Sen. Mark Kelly (D-Arizona) to boost domestic computer chip production has been approved by the U.S. Senate and now moves to the House for consideration. (Miner file photo)

WASHINGTON – A bill designed to encourage more semiconductor companies to build chip plants in the United States passed the Senate on Wednesday as lawmakers raced to finish work on a key priority of the Biden administration.

The $280 billion measure, which awaits a House vote, includes federal grants and tax breaks for companies that construct their chip facilities in the U.S. The legislation also directs Congress to significantly increase spending on high-tech research programs that lawmakers say will help the country stay economically competitive in the decades ahead.

Senate passage came by a 64-33 vote. The House vote is expected later this week as lawmakers try to wrap up business before returning to their home states and districts in August.

House Speaker Nancy Pelosi, D-Calif., has said she is confident there is enough GOP support to overcome potential defections from Democrats who view the subsidy effort to boost semiconductor companies as a misplaced priority.

Proponents of the legislation say other countries are spending billons of dollars to lure chipmakers. Backers say the U.S. must do the same or risk losing a secure supply of the semiconductors that power automobiles, computers, appliances and some of the military’s most advanced weapons systems.

Senate Majority Leader Chuck Schumer, D-N.Y., said the bill represented one of the nation's largest investments in science and manufacturing in decades and that with the Senate's approval, “we say that America's best years are yet to come."

The measure was sponsored by U.S. Sen. Mark Kelly (D-Arizona).

“While this process has been long, it has also shown what we can accomplish when we work together, Republicans and Democrats,” said Kelly said during a speech on the Senate floor after passage. “And as a result, our country is going to once again be a leader in microchip manufacturing, creating tens of thousands of great paying jobs, strengthening our national security, and lowering costs for everyday products.”

Opponents have been critical of the bill's price tag. It is projected to increase federal deficits by about $79 billion over 10 years.

President Joe Biden said the bill would create jobs and lower costs on a wide range of products from cars to dishwashers.

“For decades, some ‘experts’ said we needed to give up on manufacturing in America. I never believed that. Manufacturing jobs are back," Biden said. “Thanks to this bill, we are going to have even more of them. The House should promptly pass it and send this bill to my desk."

The bill has been in the works for years, starting with efforts by Schumer and Sen. Todd Young, R-Ind., to increase the government’s investment in high tech research and development. While the bill has taken several twists and turns, one constant theme that lawmakers repeatedly emphasized during Wednesday’s debate was the need to keep up with China’s massive investments in cutting-edge technology.

China’s government is planning on “winning the (artificial intelligence) race, winning future wars and winning the future,” Young said. “And the truth is, if we’re being honest with ourselves, Beijing is well on its way to accomplishing these goals.”

Sen. Roger Wicker, R-Miss., said, “Regrettably, we are not in the driver’s seat on a range of important technologies. China is.” Congress, he said, now has "a chance to move us back in the right direction and put America back into a place to win the game.”