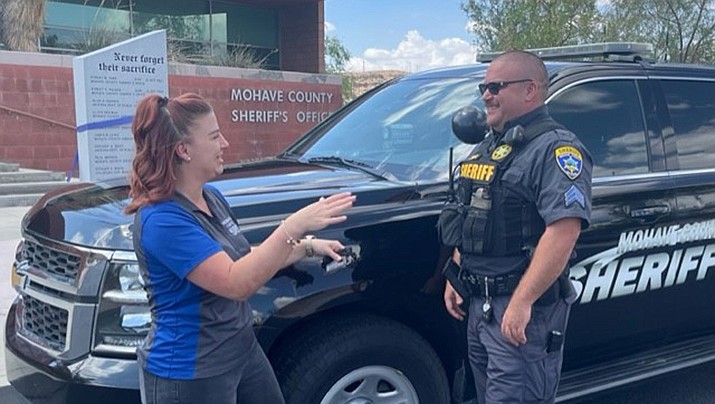 KINGMAN – Anita Mortensen is well known to county law enforcement. They’re always looking for her. No wanted poster is involved here because she is front and center as the public information specialist for the Mohave County Sheriff’s Office. For the past 4½ years, she has presented important facts and information to the media and public.

If it’s newsworthy, her press releases will reach a wide audience, informing them of the actions of her department’s deputies. She loves every minute of it, too.

Before her current job, she worked at the prison in Golden Valley for five years (three years as a corrections officer and two as a case manager). That’s where she met her husband, Tory, who was a fellow corrections officer. A strong marriage of six years has resulted in two children who attend school at the Kingman Academy of Learning.

Mortensen had no high expectations when she applied for the public information specialist position. She didn’t attend college or have any prior training as a PIO. It wasn’t easy and some on-the-job training had to take place.

She says: “The first few months on the job were a blur of information that I tried my best to retain.” She literally followed a list to get things right.

“I had to do this, pull this, type this.” However, she got things right, quickly. She’s smart – a fast-study – and has the respect of her peers.

Her background in law enforcement has also served her well in the PIO job, she said. “Once I was comfortable with the day-to-day functions, I began seeking out training opportunities that I thought would assist me in my job.”

That training has included public information oriented FEMA and ICS (Incident Command System) courses, and a vital FBI-LEEDA course of media and public relations in Peoria, Illinois, furthering her knowledge in agency image and branding, media relations and crisis communication.

Mortensen says that simply put, she is “responsible for all communications for the Sheriff’s Office.”

She believes many don’t understand what she does. She says that essentially: “I speak for the agency, the deputies on the street.”

The sheriff himself is known as a good public speaker and writes his own press statements. Mortensen’s daily tasks include “writing and issuing press releases, responding to media requests, and overseeing our social media platforms.”

Under her direction, she introduced the Sheriff’s Office to the chaotic, ever-changing world of social media. In April 2018, she launched the official Facebook page for the Sheriff’s Office who now has 48,000 followers. She believes Facebook, along with YouTube and Instagram, are the quickest ways to get vital information to the public.

Nevertheless, adverse comments on social media can be terribly frustrating. She says “the negatives can be so much louder. It can truly scare people.”

Still, she is keenly aware, like other PIOs, of the value of cementing a permanent place in the huge online community. Mortensen states that” “You can always trust that the information from our department’s social media pages is accurate and factual. I take my job of keeping our citizens informed very seriously, as this is my home and my community.”

She’s a PIO with a law enforcement agency, which involves sending out public information on a wide range of topics, including drug busts, robberies and homicides. Mortensen, the young mother of two, doesn’t easily forget the most difficult challenge of her job.

It was Labor Day weekend, 2018. Two boats crashed with a total of 16 involved. Four were killed. Mortensen was on vacation in Big Bear, California at the time. She put an important press conference together from afar. It was emotionally and mentally taxing and she was gratefulness to have her own two children visually nearby and safe.

Mortensen was born and raised in Kingman and her parents are both graduates of Kingman High School and still live in the community. She and her husband love the “small town” feel as well as the progress it continues to have. They just bought their first house and are working on making it a true family home.

She said she never forgets that her children “will forever be my greatest achievement and the driving force to be the best person I can be.”