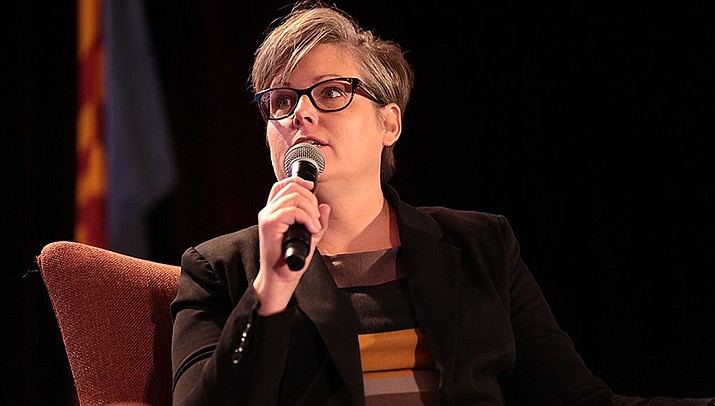 A Massachusetts man was arrested by the FBI for sending a death threat to the office of Arizona Secretary of State and Democratic gubernatorial candidate Katie Hobbs. (Photo by Gage Skidmore, cc-by-sa-2.0, https://bit.ly/3hnL22m)

PHOENIX – The FBI arrested a Massachusetts man Friday on charges he sent a bomb threat sent to the office of Arizona Secretary of State Katie Hobbs. But the threat never actually named her.

The indictment, made public Friday, charges that James W. Clark, 38, of Falmouth, says he sent a message on Feb. 14, 2021, to the website maintained by the elections division of Hobbs office.

"Your attorney general needs to resign by Tuesday Feb. 16 by 9 a.m. or the explosive device impacted in her personal space will be detonated,'' according to the indictment.

The Department of Justice, in a news release, said Clark several days later made a web search for "FEMA Boston Marathon bombing'' and another adding the words "plan digital army.''

Calls to the U.S. Attorney's Office seeking clarification of who is the victim were not immediately returned. But Murphy Hebert, Hobbs' press aide, said the bomb threat on that date does involve her boss – and was one of many.

Hobbs, a Democrat running for governor, began receiving protection from the state Department of Public Safety after fielding multiple death threats last year during the time of the election "audit'' conducted by the state Senate. She opposed the move by Republican lawmakers which came despite separate examinations of the ballots and voting equipment by Maricopa County.

And those were not the first threats. They actually dated to right after the November 2020 general election. There even was a group that gathered outside her home and chanted slogans, including "We are watching you.''

Hebert said the "I'm going to kill you'' threats have tapered off this year. But she said Hobbs still gets threats that appear to be just on the side of what is legal, with messages like "Someone should kill you.''

Hobbs is not the only one threatened after the 2020 election.

All five Maricopa County supervisors also got threats – four of whom are Republicans – after they did not initially respond to subpoenas issued by the Senate as part of the audit.

So did Sen. Paul Boyer (R-Glendale), the only Republican to vote against holding the supervisors in contempt for not honoring the subpoenas. With Republicans having just a one-vote edge in the Senate, it killed the move.

Clark appeared in federal court in Boston on Friday.

According to the Department of Justice, Clark, if convicted, faces up to 10 years for making the bomb threat, with separate five-year penalties for each of the counts of the bomb hoax and making threatening interstate communications.

The agency said the case is part of its Election Threats Task Force. Launched in June 2021, it is designed to address threats of violence against election workers.

"Illegal threats of violence put election officials and workers at risk and undermine the bedrock of our democracy: free and fair elections,'' said Assistant Attorney General Kenneth Polite Jr. in a prepared statement.

And Gary Restaino, the U.S. Attorney for Arizona, said in a statement that democracy requires his agency to support elected officials "and that we take seriously allegations of threats or violence against them.''