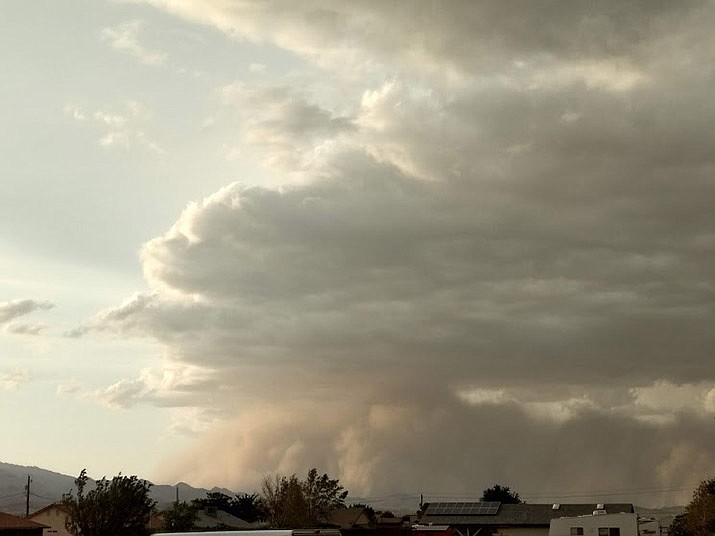 Some Arizona residents were battered by flooding last year when the summer rainy season known simply as the monsoon unleashed on mountains that have been scorched by flames — a concern again this year for residents in the throes of a particularly ferocious wildfire season. (Miner file photo)

FLAGSTAFF – Some Arizona residents were battered by flooding last year when the summer rainy season known simply as the monsoon unleashed on mountains that have been scorched by flames — a concern again this year for residents in the throes of a particularly ferocious wildfire season.

With the seasonal weather pattern starting Wednesday, many are concerned with flooding as wildfires reduce more of the ponderosa pine forests surrounding Flagstaff in northern Arizona to ash.

The monsoon can be a mixed bag – cooling sweltering cities like Las Vegas and Phoenix but bringing the risk of flooding to mountain towns and low-lying deserts alike. It carries a promise of rain but doesn't always deliver. And even when it does, the moisture isn't shared equally across the Four Corners region and beyond.

The monsoon largely left the region parched in 2019 and 2020 but had a remarkable reversal last year when some cities logged the wettest summers on record.

The outlook this year calls for equal chances of below, above and normal precipitation, although that could change when a new seasonal outlook is released Thursday, climatologists said.

Already, conditions are setting up for moisture to move into northern Arizona and other spots later this week that can aid firefighters but also bring dry lightning that could spark more blazes.

“A lot of beneficial ingredients come with this,” said Brian Klimowski, who heads the National Weather Service in Flagstaff. “That's relative humidity that will tend to suppress the fire behavior and, of course, hopefully some rain. But not too much rain. We all know the threat and the risk of post-burn flooding."

Temperatures will warm a bit Thursday and winds will come up in northern Arizona, potentially creating more active behavior on two wildfires burning on the outskirts of the city before moisture rolls in, he said.

Fire crews have corralled about one-third of the larger fire, which has charred more than 35 square miles since it started Sunday. Another wildfire in a more remote area has burned nearly 8 square miles with no containment yet.

Evacuation orders were downgraded Wednesday. While the fires have calmed somewhat and largely are moving away from homes, Coconino County officials urged residents who don't have flood insurance to buy it now. Officials are testing sirens this week in one area prone to flooding, and stocking up on sand bags and concrete barriers to lessen any potential damage, but they won't know the extent of the risk on the latest wildfires until the area can be surveyed.

“It's not realistic that we can stop flooding,” the county's public works director, Christopher Tressler, told residents Tuesday night.

The U.S. monsoon is characterized by a shift in wind patterns that pull moisture in from the tropical coast of Mexico. It sets up differently in other parts of the world, including India, northern Australia and Africa where people celebrate the first rain of the season, said Joel Lisonbee, a climatologist and drought information coordinator with the National Oceanic and Atmospheric Administration.

In Arizona, about half the rain that falls during the year comes during the monsoon, said state climatologist Erinanne Saffell. Still, the U.S. Southwest is trending toward hotter, drier weather because of climate change.

Those conditions, along with fierce winds, led to a busy wildfire season across the U.S. West this spring. In all, federal officials say more than three dozen large fires have burned more than 1,875 square miles. Over 6,700 wildland firefighters and support personnel are assigned to incidents across the country.

New Mexico has the largest wildfire burning in the U.S., a blaze that has scorched more than 523 square miles and another marching through another corner of the state.

In southwest Alaska, a 220-square mile wildfire has been moving through dry grass and brush in the largely treeless tundra away from an Alaska Native village. A front expected to move in Thursday will bring southeast winds that will reduce the threat to St. Mary's.

Temperatures were hot in California's interior Wednesday, but incoming low pressure was expected to cool things down and bring a chance of mountain showers and thunderstorms in the north by the weekend. Forecasters noted a chance of localized fire weather in the eastern Sierra Nevada because of dryness and gusts from the approaching system.