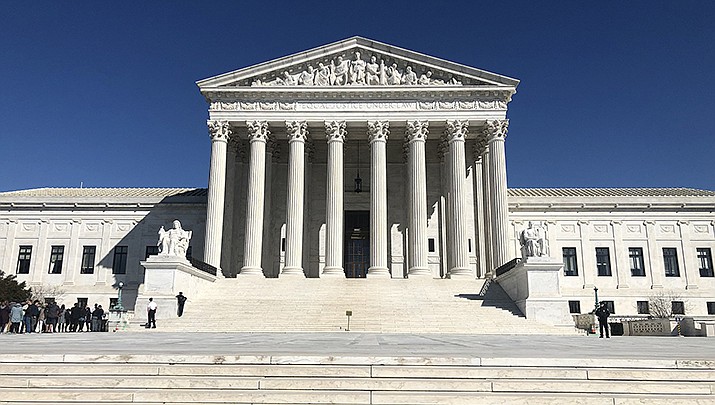 The Supreme Court said Wednesday it was wrong to wade into a dispute involving a Trump-era immigration rule that the Biden administration has abandoned, so the justices dismissed the case. The U.S. Supreme Court is pictured. (Photo by kallerna, cc-by-sa-4.0, https://bit.ly/39ykpqc)

WASHINGTON – The Supreme Court said Wednesday it was wrong to wade into a dispute involving a Trump-era immigration rule that the Biden administration has abandoned, so the justices dismissed the case.

The court had said it would answer the question of whether Republican-led states, headed by Arizona, could pick up the legal defense of the Trump-era “public charge” rule that denied green cards to immigrants who use food stamps or other public benefits.

The high court heard arguments in the case in February and appeared on track to decide it.

But in an unsigned, one-sentence opinion Wednesday, the court said it was dismissing the case. That leaves in place a lower court ruling in favor of the Biden administration that the states could not intervene.

Chief Justice John Roberts wrote separately to say he agreed with the decision to toss the case. Roberts said that “bound up” in the case are “a great many issues beyond” the question that the court had agreed to decide. “It has become clear that this mare's nest could stand in the way" of deciding the case "or at the very least, complicate our resolution of that question,” he wrote.

Roberts said the court's action should not be taken as “reflective of ... the appropriate resolution of other litigation, pending or future, related to the 2019 Public Charge Rule, its repeal, or its replacement by a new rule.”

Roberts was joined by three other justices in the court's conservative majority: Clarence Thomas, Samuel Alito and Neil Gorsuch. Gorsuch was appointed to the court by Trump. The former president's two other nominees, Justice Brett Kavanaugh and Justice Amy Coney Barrett, said nothing.

At the center of the case was a federal law says that green card applicants cannot be burdens to the country or “public charges.” The Trump administration significantly expanded the definition, saying the use of public benefits including food stamps or Medicaid could be disqualifying. That led to court challenges, but the Supreme Court allowed the policy to take effect while those continued.

The Biden administration rescinded the rule and has since announced new guidelines. The administration had said that in practice, the government denied green cards to only three people under Trump’s rule and that their applications were later reopened and approved. Immigration groups have said the bigger impact of the rule was scaring immigrants, causing them to drop benefits or not enroll in them because of fears doing so could affect their applications to become legal permanent residents.

The case is State of Arizona v. City and County of San Francisco, California, 20-1775.