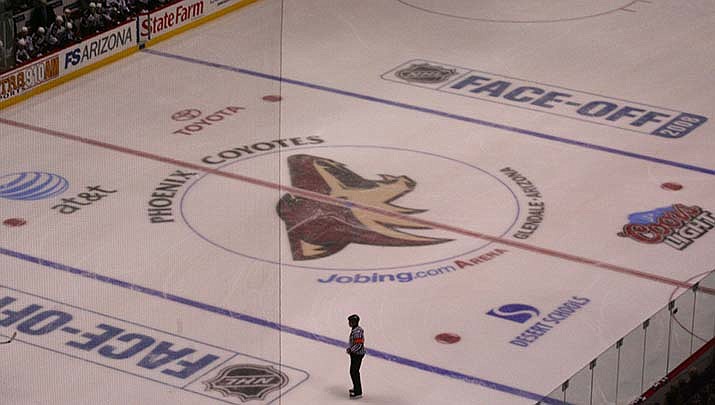 After an eight-hour meeting, the Phoenix Coyotes NHL franchise finally got what they wanted: approval to negotiate with the city of Tempe to build a new arena close to downtown. (Photo by Keeton Gale, cc-by-sa-2.0, https://bit.ly/2W7AJe2)

TEMPE – The Arizona Coyotes gave an elaborate presentation, had players on hand to give their support and listened to concerns presented by Sky Harbor Airport officials. More than 100 citizens offered their opinions, then statements from 220 more were read in the Tempe City Council chambers.

After the eight-hour meeting, the Coyotes finally got what they wanted: approval to negotiate with the city of Tempe to build a new arena close to downtown.

Now comes the next phase.

The right to negotiate a deal in place, the Coyotes are in the process of working out the details in what they hope are the final steps toward securing a new permanent home.

“This isn’t just here, this is the term sheet, here’s a number,” Coyotes President and CEO Xavier Gutierrez said. “It’s all of that has already been put on the table. It’s a continuation of that analysis on behalf of the city and us addressing any of the specific topics there.”

The Coyotes have been searching for a permanent home since the city of Glendale pulled out of a 15-year, $225 million lease agreement in 2015. Glendale decided to not renew the lease after the 2021-22 season and the Coyotes found a temporary home at Arizona State’s new 5,000-seat arena starting next season.

The franchise took a big step toward securing a permanent home on June 2, when the Tempe City Council voted to negotiate on a proposed development of nearly $2 billion that would include a new arena, entertainment district and residential units.

The Coyotes submitted a proposal of more than 90 pages to Tempe, so the major components have been laid out. The two sides have already started hashing out many of the details, including addressing concerns by Sky Harbor and the FAA about the district's proximity to one of the airport's runways.

Gutierrez and the Coyotes hope to have a deal for the 46-acre tract of land worked out by the end of the year, but know it could take longer.

“We’d love to do it in the fall. That’s what we’ve told them. We said that would be our ideal,” Gutierrez said. “But we are very, very aware that this is not our decision. We do not control the process. We respect the process just as we had from day one. We know that the city is directing it and and trying to ensure that they’re comfortable.”

The Coyotes plan to finance the entire project privately and are hoping to buy the land from the city. The franchise is asking Tempe to direct some of the sales tax generated by the private real estate to pay for bonds with the land and real estate as the sole collateral.

The Coyotes have already started selling season tickets for the 2022-23 season at Arizona State's arena, though Gutierrez said the team isn't ready to release details just yet.

Since the team will be playing on campus the next three years, the Coyotes plan to offer 500 tickets every game to Arizona State students.

“We want them to experience a hockey game where most of them maybe haven’t even done that ever in their lives,” Gutierrez said. “And so it’s gone very well. We feel very confident.”

Now that Tempe has agreed to negotiate, the process has started.

The Coyotes hope to keep that momentum rolling right into a new arena.