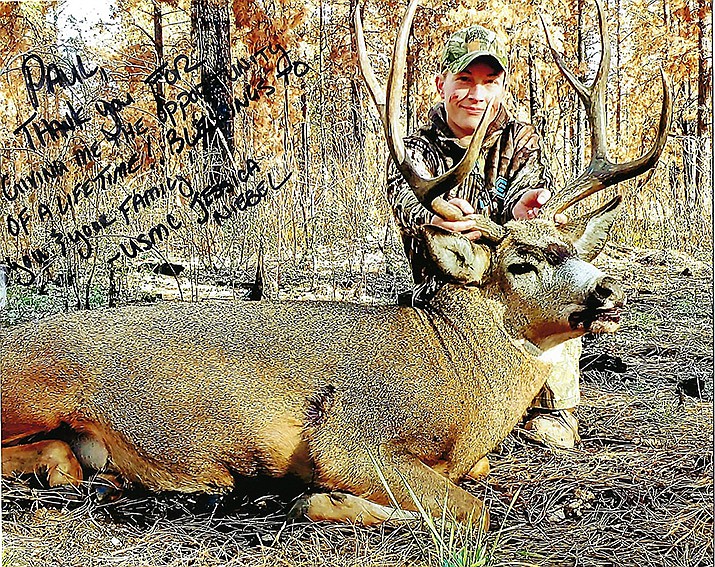 This is the signed photo that Marine Corps vet Jessica Neibel presented to Paul Lyells after he had donated his early Kaibab deer tag to the Arizona Elk Society Heroes Rising Outdoors Program, which gave it to Neibel. (Courtesy photo)

Last year my friend Paul Lyells found out that he had Stage 4 colon cancer and the prognosis didn’t look good for this long-time Arizona sportsman.

After receiving this distressing news Paul found out that he had drawn a tag for a deer hunt he had been applying for for many years.

It was an early westside Kaibab deer tag, a tag that generally requires residents five to seven years of applying before they draw.

Lyells was hopeful that he would be able to go on the hunt, and even got a CHAMP permit from the Arizona Game and Fish Department that would allow him to hunt from a motor vehicle that was stopped and off the road.

But as time got closer for the hunt, Paul’s physical condition continued to deteriorate and it became obvious that he would be physically unable to go.

I contacted Brenda Cagle, Paul’s partner of 36 years, and asked her if she thought Paul would consider donating his tag to the Arizona Elk Society’s Heroes Rising Outdoors Program.

This is a program where persons who have drawn a big game tag can donate their tag to the AES, who will then find an Arizona veteran who is able to go on a hunt and utilize the tag.

Brenda said Paul was OK with donating his tag and I started the process.

I called Tom Wagner, the coordinator for the Heroes Rising Outdoors program, and made him aware of the tag that would soon become available.

Wagner told me that they had a lady Marine Corps veteran who had served in Iraq who was going to be the recipient of Paul’s tag.

Once the paperwork was filled out and the tag transferred to Scottsdale resident Jessica Neibel it was time to prepare for the hunt.

Since I was already doing a donated hunt with another disabled vet from the AES at the same time, my brother Gary and friend Eric Hawkinberry said they would provide a camp for Neibel and her friend, a fellow disabled Marine vet.

We all met at a designated area on the Kaibab and on the first day out Jessica and her friends saw a group of bucks. Unfortunately, Jessica wasn’t able to get a shot.

On day two Jessica and her helpers relocated the group of bucks and after a short stalk, Neibel had her first mule deer buck, an old, big-bodied 3x3 down on the ground.

Jessica was thrilled with the buck and Paul was told of her success.

But the story didn’t end there. Jessica had an 8x10 photo of her buck made and she got it framed. She signed it with a heartfelt “Thank You” and then she made the drive to Paul’s home in east Mesa where she presented the photo to him.

Paul was overcome by the kindness that Jessica had shown in sharing the experience she had.

Sadly, on May 7, my long-time friend passed away. However, Brenda said having the signed photo had meant a lot to Paul in his final days. Paul, in a final show of unselfishness, had made both he and Jessica happy with the tag donation.

If you draw any Arizona big game tags this year and find out that you can’t use them for any reason, contact Wagner at the Arizona Elk Society at 480-760-3868.