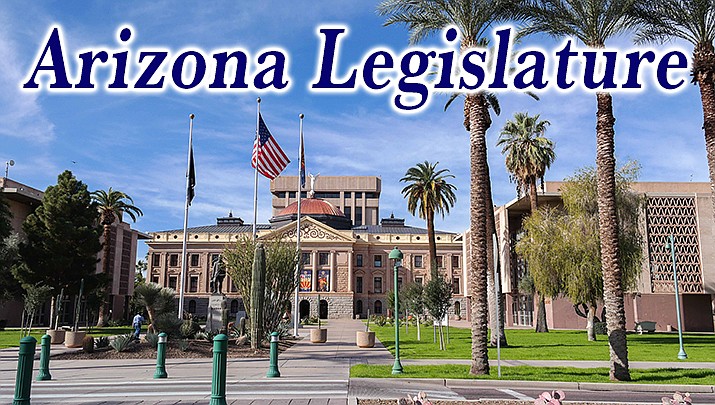 The Republican-controlled Arizona Legislature has started hearings on a state budget plan for the fiscal year that begins July 1, 2022.

PHOENIX - The Republican-controlled Arizona Legislature began hearings Tuesday on a long-delayed state budget plan that was immediately panned by some Democrats and public school advocates for failing to use a huge surplus to significantly boost school funding.

But the plan remained incomplete, short of votes and without a clear path to the finish line. Sen. David Gowan recessed his appropriations committee until Tuesday afternoon, saying he would not proceed because some agreements were not being honored.

The $17.9 billion spending plan must be in place by July 1 to avoid a near-complete shutdown of state government. The Senate and House have delayed taking up a budget for nearly three months because some Republicans have demanded more school spending, while others demanded less.

Republicans hold just one-seat majorities in the House and Senate and without Democratic support can only lose one vote and be able to pass the budget.

The basic spending plan is $15.6 billion, but that leaves out $2.3 billion in sales tax dollars that they want to divert from the general fund to pay for specific projects like road construction and a border wall in an apparent effort to lower the headline spending number. That brings total spending for the coming budget year at $17.9 billion, up from the current $12.3 billion.

Critics call the plan's new school funding miserly, especially when the state is sitting on a unprecedented $5.3 billion surplus even with last year's $1.7 billion in income tax cuts.

About 50 teachers wearing red showed up to protest the budget’s education spending, saying it fell short of the $1.2 billion in new ongoing funding they sought for schools, including money dedicated to full-day kindergarten and special education.

“Educators are ... running to other states where we know they can get paid a livable wage,” said Marisol Garcia, vice president of the Arizona Education Association, the state’s largest teachers union.

The protest turnout was a far cry from four years ago, when tens of thousands of teachers walked out of school and flooded the Capitol complex to demand higher wages, eventually securing enough additional funding to give teachers a 20% pay increase by 2020.

Garcia said teachers are still fired up about what they see as a lack of investment in education over many years, even though the number protesting at the Capitol has dwindled. Many more are calling lawmakers and advocating on social media, she said.

“The energy is still there,” she said. “Folks are exhausted. They’ve been through two years of COVID educating. This is a different world we’re living in.”

The plan that emerged late Monday adds about $676 million in new K-12 spending in the coming budget year for traditional district and charter schools, although $137 million is a mandatory inflation adjustment. There's also another $306 million to repair schools and chip away at $865 million owed to schools from a budget gimmick lawmakers used during the Great Recession. Of the new money, $100 million will go to special education, which has long been underfunded.

But it falls short of the money voters said they wanted in 2020 when they approved a new tax on the wealthy to boost K-12 spending by about $900 million. The state Supreme Court ruled that Proposition 208 was unconstitutiona l because it put schools over a voter-approved spending limit.

In addition to the new school spending, lawmakers are making massive investments of nearly $1 billion in state highway construction and $544 million for border security, including fencing. It provides 15% raises for state troopers costing $25 million and adds money to hire 90 more sworn officers and civilian staff. Corrections officers will get 20% raises and all other state workers would also get a bump. Rank and file workers have not had a raise in a decade.

The Legislature also proposes earmarking $1.1 billion in the current budget year to pay down pension debt and depositing $425 million in the state's rainy day funds, which can be tapped in a recession to help avoid budget cuts. It currently holds nearly $1 billion.

Sen. Paul Boyer, a Glendale Republican who has demanded changes to the budget, said he's not yet on board. He's been pushing for nearly $1 billion in new school funding and an expanded school voucher program. He has gotten much of the school spending and the House is pushing a universal school voucher plan.

But the new budget adds only a sliver of what he said is the needed funding for the state's three universities, boosts the limits for another private school funding program called school tuition organizations and does not ask voters to approve a new fire district tax.

“The question is do they have the votes or not,” Boyer said Tuesday.

As it stands, Boyer said he's opposed. And some Republicans are upset at the sheer amount of spending, leaving open the possibility that they’ll need Democratic votes.

“They do need Democrats, but by continually putting in poison pills like the STOs, they can't vote for it,” he said, referring to school tuition organizations.

Sen. Sean Bowie, a Democrat who has said all session that he's prepared to vote for a GOP budget, said he's also not yet ready to back the proposal.

"I think the budget has made a lot of movement in the last couple of weeks," Bowie said. “There’s a lot of good investments in there.”

He ticked off several good items, including widening Interstate 10 north of Casa Grande, rate increases for developmental disability providers, a boost in stipends paid to grandparents caring for their relatives, and more.

But not included is a $74 million plan he championed and Republican Gov. Doug Ducey put in his state of the state address to add a new tax credit for working poor Arizonans. And he's also concerned about the lack of new university funding.

"I think there's a path," Bowie said. “I don't think we're quite there yet but hopefully we can get there.”