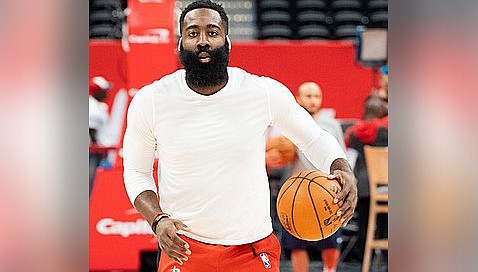 PHILADELPHIA – James Harden is taking less with hopes the Philadelphia 76ers can do more.

A person familiar with the situation said Harden chose not to exercise his $47.4 million option for next season and will become a free agent — but with no designs on leaving Philadelphia. Harden made the decision to allow the 76ers the flexibility they need to sign other players this summer, said the person who spoke to The Associated Press on condition of anonymity because neither side confirmed those plans publicly.

That will be a major factor when the NBA opens the free agency negotiating window at 6 p.m. Eastern on Thursday, with Philadelphia among the teams that will be expected to target Miami forward P.J. Tucker, among others.

The most likely scenario for Harden now is this: The 10-time All-Star signs a new deal with Philadelphia, for something close to that $47.4 million number, after the team has addressed other needs and improved its chances of becoming a true championship contender in 2023. If Harden had opted in before his Wednesday afternoon deadline, Philadelphia would have had a much more difficult time in finding financial pathways toward luring free agents.

CLEVELAND – The NFL and Deshaun Watson’s legal team presented their arguments before a disciplinary officer for a second day Wednesday, with both sides holding firm as the hearing is scheduled to continue in Delaware on Thursday.

The league is insisting on an indefinite suspension and Watson’s side is arguing there’s no basis for a punishment that significant, two people in attendance told The Associated Press. Both people spoke on condition of anonymity because the hearing isn’t public.

Former U.S. District Judge Sue Robinson, who was jointly appointed by the league and the NFL Players’ Association, is tasked with determining whether Watson violated the NFL’s personal conduct policy and whether to impose discipline.

If either the union or league appeals Robinson’s decision, NFL Commissioner Roger Goodell or his designee “will issue a written decision that will constitute full, final and complete disposition of the dispute,” per terms of Article 46 in the collective bargaining agreement.

Watson agreed to settle 20 of 24 civil lawsuits for sexual misconduct, but the league is seeking at least a one-year suspension, one of the people told The AP. Watson’s side expects a suspension but wants the three-time Pro Bowl quarterback to play for the Cleveland Browns at some point this season, another person told the AP.