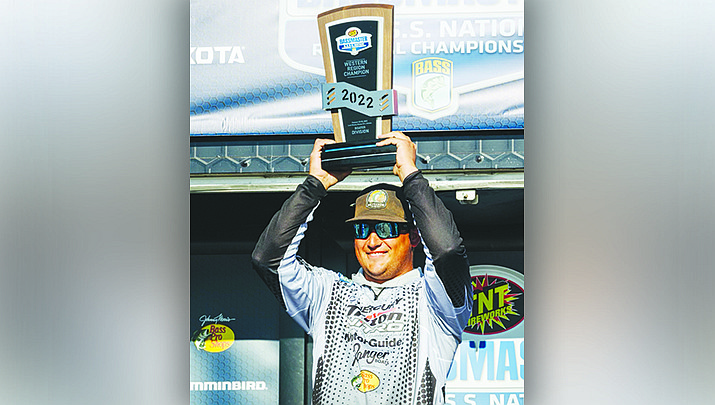 LAKE HAVASU CITY – If you’ve lived in Mohave County for any length of time and you fish for bass, you probably know the name Frankie Mueller.

Mueller is well known among avid bass fishermen in Mohave County. The 26-year-old has a long and successful career as a competitive bass angler going back to 2014.

Since that time Mueller has fished in a lot of tournaments and different bass fishing circuits. He has two career wins and three top-10 finishes in four events.

His previous highest finish was fifth in the Major League Fishing Toyota Series. This year He participated in the BASS Nation series and he finished fourth, qualifying as a member of the Arizona team for the western regionals. There were nine western states represented in the regional tournament.

Mueller said he had just one goal. “I wanted to beat the other nine Arizona anglers!”

And in the end, he did just that, as well as the rest of the field of pro anglers, but it wasn’t easy.

On the first day of three-day tournament, Mueller checked in five bass that weighed 12.5 pounds. That put him in 12th place.

On the second day Mueller had the heaviest bag of the tournament, weighing in five bass that weighed an incredible 22.03 pounds.

But even with the incredible second day bag, there were plenty of other anglers who were in striking distance. The winner was going to be determined by the anglers that brought in another good bag on the last day.

Frankie said that he was fishing in the lake, never in the river, where he normally goes. “I found some good fish on a stretch of tules and stayed there all three days.” He said he fished in just seven spots.

That last day he started off good, but then struggled. “I had three bass early that weighed about 10 pounds, then I went five hours without a bite.” During the last couple of hours of the tournament he managed to land just one more bass. “I lost two bass and thought I had lost the tournament,” Mueller said.

But the anglers closest to challenging him were also having a tough time. None of the top four brought in a five-fish limit.

In the end, Mueller won with a three-day total of 14 bass that weighed 47pounds, 4 ounces. The second and third place anglers tied with 44 pounds, 15 ounces of bass.

Though Mueller said he has never fished that lake before, he is going back this summer to do some pre-fishing there. There will be 50-60 boats in that tournament and the top 3 three qualify for the Bassmaster Classic.

Mueller said he wanted to thank his sponsor, Micah Jones of Highland Glass, and all of his family and friends that supported him during this tournament.