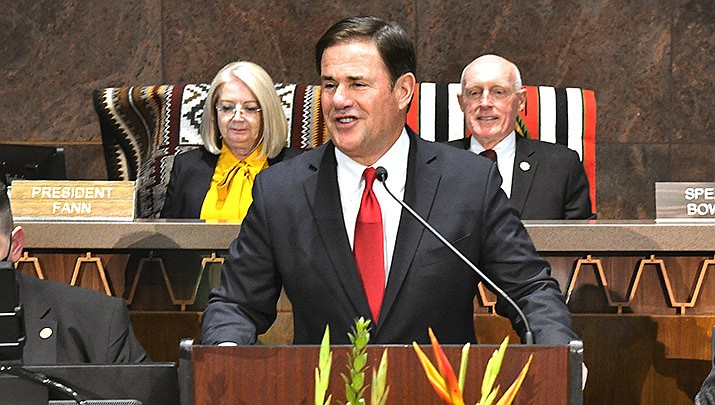 Arizona Gov. Doug Ducey on Wednesday signed legislation that earmarks $400 million in state general fund cash to add a third lane in each direction to a 26-mile section of Interstate 10 south of Phoenix that has long been a congested bottleneck. (File photo by Howard Fischer/For the Miner)

PHOENIX – Arizona Gov. Doug Ducey on Wednesday signed legislation that earmarks $400 million in state general fund cash to add a third lane in each direction to a 26-mile section of Interstate 10 south of Phoenix that has long been a congested bottleneck.

The highway section is the last stretch of I-10 between Phoenix and Tucson that is still just two lanes. That has led to slowdowns between Chandler and Casa Grande that limits commerce and impacts commuters traveling the section to and from growing Pinal County.

Ducey said at a signing ceremony attended by state lawmakers from both parties, the mayors of Chandler and Casa Grande and Gov. Stephen Roe Lewis of the Gila River Indian Community that new manufacturers in Pinal County need the expansion, as do companies hauling freight from Mexico, commuters and tourists.

“This legislation ensures that everyone in Arizona can get to their destination safely and quickly, even as our state continues to grow,” Ducey said.

Electric car manufacturer Lucid Motors has a new plant in Casa Grande and electric and hydrogen fuel semi-truck manufacturer Nikola has opened a plant in Coolidge.

In addition to the third lane over the 26-mile section and extending an existing HOV lane by several miles, the project will improve several bridges and interchanges, replacing an existing bridge over the Gila River, improve a frontage road and make other safety improvements.

The project's total cost is estimated at $990 million, according to the Arizona Department of Transportation. Prior to Wednesday's $400 million general fund appropriation, $290 million in state, federal and Maricopa County cash had already been set aside for the project. ADOT will apply for an additional $300 million grant from federal infrastructure funds approved by Democratic President Joe Biden last year.

Construction is expected to begin early next year and be complete in 2026. Ducey called for the new spending in his January State of the State address.

Republican state Sen. T.J. Shope of Coolidge sponsored the legislation, which drew only two no votes in the 90-member Legislature. He has been working for a decade to secure the money needed to widen the section of highway.

"First and foremost, let us all remember that this expansion is necessary (for) the safety of the people who travel it on a daily basis," Shope said, noting the tragic accidents that have led to deaths along the highway.

The $400 million in state funds is available because of an unprecedented state budget surplus currently estimated at $5.3 billion, more than 40% of the current year's state budget. Republican lawmakers who hold the majority in the Senate and House have been at a stalemate for the past two months, with some demanding more tax cuts on top of last year's massive income tax cut and others demanding nearly $1 billion in new K-12 school spending.

In addition, Ducey wants $1 billion set aside for new water projects and has proposed raises for state workers and new spending on a variety of K-12 education and social programs.