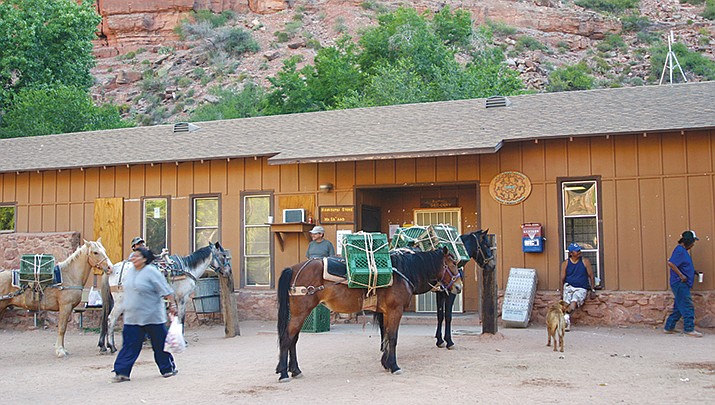 The Havasupai Tribe in the Grand Canyon has extended the closure of its reservation through 2022 due to COVID. The market in Supai is pictured. (Photo by Elf, cc-by-sa-3,0, https://bit.ly/391peve)

SUPAI – The Havasupai Tribe deep in a gorge off the Grand Canyon in northern Arizona has extended the pandemic-prompted closure of its reservation through the 2022 tourism season, the tribe announced Friday.

The reservation renowned for its towering blue-green waterfalls has been closed to visitors since March 2020.

The tribe said it is making enhancements to its facilities as well as repairs that spokeswoman Abbie Fink said are needed because of the extended closure. The facilities include a trailhead, campground and lodge.

“We have seen our tribal lands return to their natural beauty over the last two years and are eager to share their beauty once again,” Chairman Thomas Siyuja, Sr. said in a statement released by the tribe.

Tourists with reservations through 2022, which have not already been rebooked, are being rescheduled for the same date in 2023 but no further reservations will be taken for the 2023 tourist season, the statement said. “The Havasupai Tribe appreciates your ongoing patience and looks forward to once again welcoming tourists back to Supai,” Siyuja said.

PHOENIX – Phoenix police appealed to the public for information after a 32-year-old woman was killed in a drive-by shooting as she and her pre-teen son waited in line for food.

Investigators don’t believe Martha Adrianna Alejo was the intended target when somebody in a car that stopped in front of a business fired shots at people in line Wednesday night, a police statement said. Police did not immediately respond Friday to a request for information about the business. “Several other innocent bystanders were also in the direct line of fire, but no one else was injured,” the statement said.

No arrest was made and no suspect description was released, but the police committed to using every resource to find those responsible, the statement said.

“We know that violent crime in our city has been on the rise. No one should have to worry about being shot as they stand in line. And no child should have to see their mother gunned down for no reason,” said Cmdr. Warren Brewer.