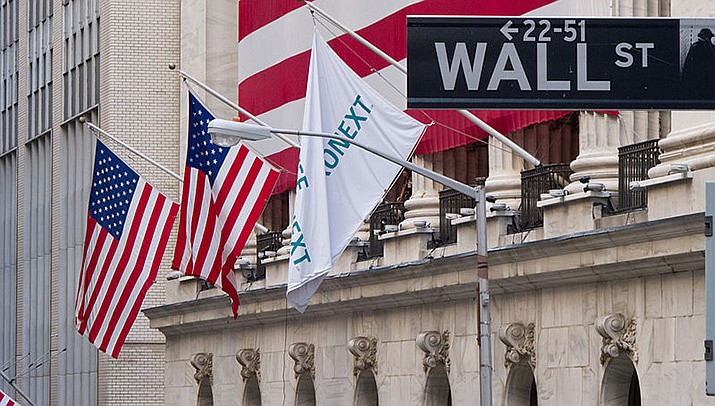 NEW YORK – Stock indexes on Wall Street ended a choppy day of trading with a mixed finish Tuesday, after an afternoon rally in technology companies helped reverse an early slide.

The S&P 500 closed 0.2% higher, snapping a three-day losing streak, after swinging between a gain of 1.9% and a loss of 0.8%. A day earlier, the benchmark index slumped 3.2%, hitting its lowest level in more than a year.

The Dow Jones Industrial Average slipped 0.3%, while the tech-heavy Nasdaq climbed about 1%.

Big technology stocks, which have been swinging sharply both up and down recently, helped counter losses elsewhere in the market.

The market's see-saw action came ahead of the release of the Labor Department's consumer price index, a key economic report on inflation that investors will be closely watching as they try to gauge how aggressively the Federal Reserve will raise interest rates as it fights inflation.

Economists expect the index eased to 8.1% in the 12 months ended in April. That would mark the first annual decline since August.

“If inflation is a lot lower, as they’re expecting it to be, then we may very well see the markets rally because perhaps people think the Fed won’t hike as much or as aggressively,” said Randy Frederick, managing director of trading & derivatives at Charles Schwab.

Big technology stocks, which have been swinging sharply both up and down recently, accounted for much of the S&P 500's turnaround. Apple rose 1.6% and Microsoft rose 1.9%.

Treasury yields have been rising and stocks have been extremely volatile recently as Wall Street adjusts to an aggressive turnaround in the Federal Reserve's policies away from supporting the economy. The central bank is raising interest rates from historic lows to fight persistently rising inflation, which is at its highest levels in four decades.

The Fed has raised its benchmark rate from close to zero, where it sat for much of the coronavirus pandemic. Last week, it indicated it will double the size of future increases.

Higher prices on raw materials, shipping and labor have been cutting into corporate financial results and forecasts. Many companies have been raising prices on everything from clothing to food, raising concerns that consumers will eventually cut spending, which would hurt economic growth.

Russia's ongoing invasion of Ukraine has only increased worries about rising inflation. The conflict pushed already high oil and natural gas prices even higher, while putting more pressure on costs for key food commodities like wheat and corn. U.S. crude oil prices fell 3.2% on Tuesday, but are up about 36% in 2022. Wheat prices are up more than 40% for the year.

Should Wednesday's consumer price index show a pullback in inflation versus a year ago, that could put investors in a buying mood, at least for a little while.

“In the very short term we’re a bit oversold,” said Frederick. "So, if we could get a print below 8% year-over-year, I think we could get a little bit of a market rally.

Still, most of the market's recent rallies have often been followed by a down day, he added.

Meanwhile, investors are also still reviewing the latest round of corporate earnings with mixed results. Peloton tumbled 8.7% as the former pandemic darling of investors reported results that were much weaker than Wall Street was expecting. Food distributor Sysco rose 6.1% after beating analysts' forecasts.

Migraine treatment developer Biohaven Pharmaceutical surged 68.4% after Pfizer said it will buy the company for $11.6 billion. Pfizer already owns a portion of the company.