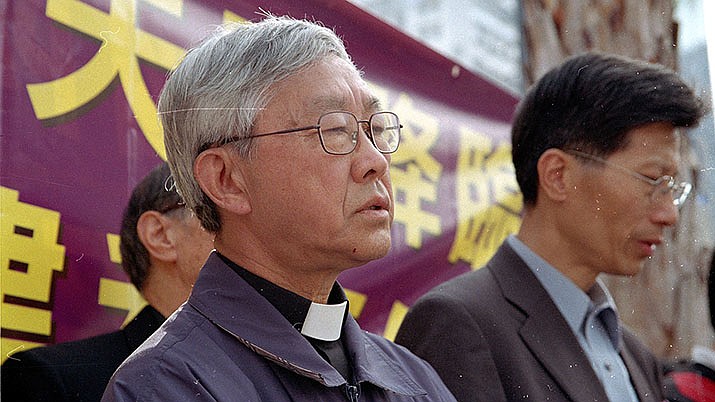 HONG KONG - A 90-year-old Roman Catholic cardinal, a singer and at least two others have been arrested in Hong Kong on suspicion of colluding with foreign forces to endanger China’s national security, in an action widely condemned as a further sign of Beijing's erosion of rights in the city.

The arrests further expand a blanket crackdown on all forms of dissent in the city that appears increasingly vindictive in prosecuting actions performed prior to the enactment of the national security law. The crackdown is penetrating further into the city’s long-respected economic, religious and educational institutions, along with non-governmental organizations, many of which have closed down their Hong Kong operations.

A police statement said arrests were made Wednesday against two men and two women between the ages of 45 and 90 who were trustees of the 612 Humanitarian Relief Fund, which provided legal aid to people who took part in 2019 pro-democracy protests that were quashed by security forces.

Another person, identified only as a 37-year-old man, was cited for failing to properly register the fund, which closed down in 2021. Those arrested had been ordered to surrender their travel documents and would be released on bail.

Further arrests in the case are pending, the police statement said, which did not identify those detained by name.

“Police investigations show that the above-mentioned persons are all trustees of the ‘612 Humanitarian Support Fund,' suspected of make requests of foreign or overseas agencies, imposing sanctions on the Hong Kong Special Administrative Region (and) endangering national security," the statement said.

Scores of pro-democracy activists have been arrested under a sweeping National Security Law imposed on the city by Beijing in 2020 following the demonstrations, including veteran lawmaker Martin Lee and publisher Jimmy Lai. The city’s independent media have been gutted and its legislature reorganized to pack it with Beijing loyalists.

Zen, the retired archbishop of Hong Kong, is a fierce critic of China and has been blistering in his condemnation of the Vatican’s 2018 agreement with Beijing over bishop nominations, which he has said was a sellout of underground Christians in China.

The Vatican spokesman, Matteo Bruni, said the Holy See “learned with concern the news of the arrest of Cardinal Zen and is following the evolution of the situation with extreme attention.”

Ho also has been outspoken in her advocacy of civil and political rights. Her manager, Jelly Cheng, confirmed Ho’s arrest but said she had no other information.

“Today’s arrests signal beyond a doubt that Beijing intends to intensify its crackdown on basic rights and freedoms in Hong Kong,” said the group’s chief executive, Benedict Rogers.

“We urge the international community to shine a light on this brutal crackdown and call for the immediate release of these activists,” Rogers said.

Several leading Kong Kong activists have fled to Taiwan, Britain or elsewhere, while thousands of other Hong Kongers have chosen to leave the city, raising concerns about the economic future of the Asian financial center of 7.4 million people.

The arrests follow the selection on Sunday of Hong Kong’s new leader, John Lee, a hard-line former security chief who ran unopposed in a process controlled by Beijing and is under U.S. sanctions for his role in the 2019 crackdown and ensuing events.

The European Union and foreign ministers from the Group of Seven industrialized countries — Canada, France, Germany, Italy, Japan, the U.K. and the U.S. — condemned the election as fundamentally undemocratic and a betrayal of the “one country, two systems” principle under which Hong Kong was supposed to retain its own political, legal and economic system for 50 years after the end of British colonial rule.