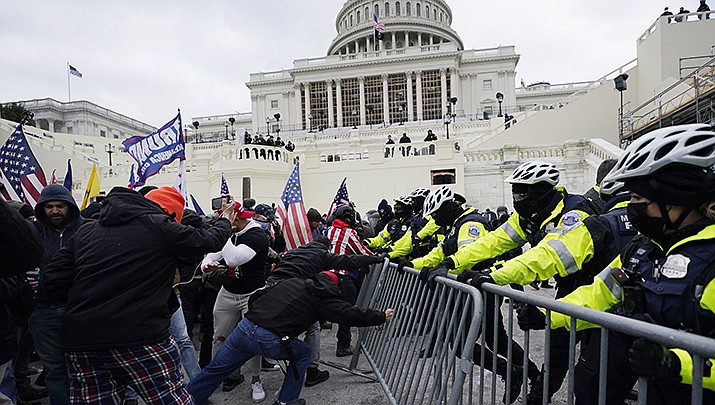 A federal judge scheduled a trial next year for a far-right internet troll after the former Arizona resident, known to his social media followers as “Baked Alaska,” balked at pleading guilty on Wednesday to a criminal charge stemming from the U.S. Capitol riot. (AP file photo)

A federal judge scheduled a trial next year for a far-right internet troll after the former Arizona resident, known to his social media followers as “Baked Alaska,” balked at pleading guilty on Wednesday to a criminal charge stemming from the U.S. Capitol riot.

U.S. District Judge Emmet Sullivan refused to accept a guilty plea by Anthime Gionet after he professed his innocence at the start of what was scheduled to be a plea agreement hearing. Instead, the judge set a March 2023 trial date for Gionet, who is charged with a misdemeanor count of parading, demonstrating or picketing inside a Capitol building.

“If he wants a trial, he'll get a fair trial,” Sullivan said.

Gionet would have faced a maximum sentence of six months imprisonment if he had pleaded guilty to the misdemeanor.

During the riot on Jan. 6, 2021, Gionet streamed live video that showed himself inside the Capitol and repeatedly encouraging other rioters to stay there. He joined others in chanting, “Patriots are in control” and “Whose house? Our house!” Before leaving, he profanely called a police officer an “oathbreaker,” the FBI said.

Gionet told the judge that he wanted a trial but claimed prosecutors had threatened to “hit” him with an additional felony charge. “So I think this is probably the better route," he added.

“Are you pleading guilty because you’re guilty?” Sullivan asked.

“I believe I’m innocent, your honor,” Gionet replied. “I can't take your plea of guilty if you tell me you're innocent,” the judge said. Aloi said prosecutors never threatened to charge Gionet with a felony if he didn't take the plea deal.

“We did say that the case would continue to be investigated and where the facts led is where the charges would ultimately lead,” she said. “I accept that representation,” the judge said. “Your office has proceeded in a very honorable manner.”

Gionet's lawyer has claimed he only went to Washington, D.C., to document what happened that day. Prosecutors disputed Gionet's contention that he is a member of the news media.

Other riot defendants have argued that they merely went to the Capitol as journalists to document what happened on Jan. 6. Infowars host Jonathan Owen Shroyer has asked a judge to throw out his riot charges, accusing prosecutors of trampling on his First Amendment rights to “protest, speak freely and report the news.”

Federal authorities have used Gionet's video to prosecute other rioters, including three men from New York City. Antonio Ferrigno, Francis Connor and Anton Lunyk pleaded guilty on April 28 to riot-related charges. Gionet's livestream showed them in Sen. Jeff Merkley's office, according to court filings accompanying their plea agreements. Gionet was arrested in Houston less than two weeks after the riot. He has moved from Arizona to Florida since his arrest.

Gionet, who grew up in Anchorage, Alaska, used social media to build a following in far-right political circles. He became known for posting videos in which he attempts to troll or pull pranks on his targets He was scheduled to speak at the white nationalist “Unite the Right” rally in Charlottesville, Virginia, before it erupted in violence and bloodshed in 2017.

BuzzFeed, where Gionet once worked, reported that Twitter permanently banned him from its platform after the Charlottesville rally.

In January, Gionet was sentenced to 30 days in jail for misdemeanor convictions stemming from a December 2020 encounter in which authorities say he shot pepper spray at an employee at a bar in Scottsdale, Arizona.

More than 790 people have been charged with federal crimes related to the Capitol riot. Over 280 of them have pleaded guilty, mostly to misdemeanors, and over 170 have been sentenced. Approximately 100 others have trial dates.