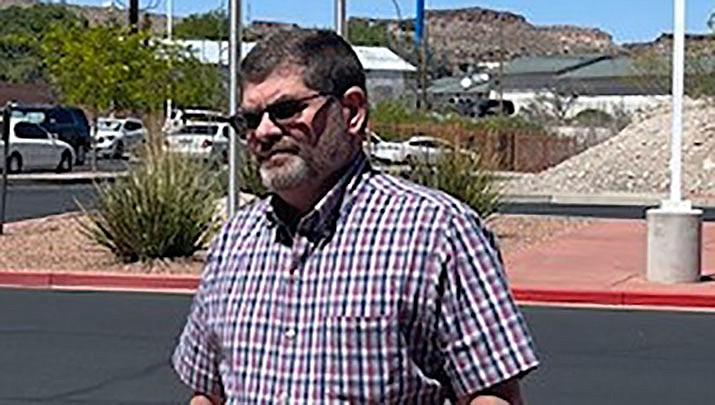 Among many other duties, nine people are currently in charge of making sure paychecks are handled for all county employees. Ken Cunningham is the Director of the Mohave County Human Resources(HR) Department. He grew up in Milwaukie, Oregon, near Portland, graduating from Portland State University and getting a master’s degree from the University of Phoenix. He spent six years of duty in the Marine Corps. Today, he is especially proud of being a lifetime member of the Disabled American Veterans Association.

Cunningham spent over 22 years working for Kaiser Permanente in Portland, Oregon mostly in HR positions, such as staffing systems manager, service center supervisor, and payroll supervisor. He and his wife, Kristen, parents of four, set out for new horizons in 2011. They found their new life with far less rain, more sunshine, as well as heat in Kingman. Cunningham settled in with a new county job, relishing the new location.

Cunningham worked his way up to becoming the county’s Acting HR Director and got the job permanently in January, 2014. Mohave County, like many other workplaces in the U.S., in either the public or private sector, has become more difficult recruiting and retaining a skilled work force. Cunningham’s dedicated crew of eight have become “generalists” in their positions, despite job titles. Some have spent far more time in recruitment for open county positions and many jobs remain available, even in HR itself. “We’re in a rebuilding year and we definitely need a full-time trainer,” says Cunningham.

Why should someone become an employee of Mohave County as opposed to other jobs available? Cunningham says there’s a major “potential for growth. You can go into almost any field you want in the county.” With 300 different job classifications offered, Cunningham adds, “if someone’s just starting out, someone who doesn’t want to go to college, that young person can start at a job with us, and grow, staying with the county for 20 or 30 years, getting experience and moving up.”

Retention is critical to the county as well and Cunningham points out that he has “someone in my office who I hired right out of high school. She’s now a generalist training to be an analyst.” He believes that a county position is simply the perfect opportunity for people to grow. Like finding his office generalist, Cunningham’s staff recruits at the local high schools every available opportunity they have to bring new employees on board in departments such as public works, health, and the sheriff.

Cunningham and his family are enjoying life in their surroundings. Kristen teaches at Kingman High while he goes to task daily at his Beale Street office. He says, “I love HR. It’s different every single day you come to work. There’s no set routine. With only 9 of us in the department, we’re all generalists. Everybody does everything, despite our job title. We’re just starting this volunteen program.” (It’s a special program for teenagers to get community service credits). He concludes by once again referring to growth: ”Mohave County is up and coming.”