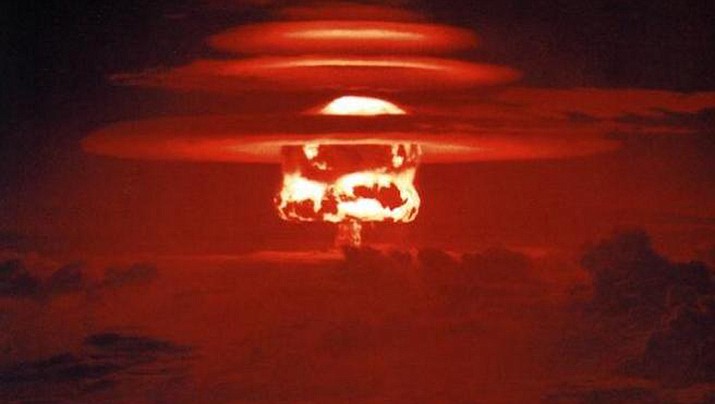 Congress has approved the downwinder bill that compensates uranium miners and people who lived downwind from dozens of atomic weapons tests conducted in Nevada, but southern Mohave County residents were not added to the eligibility list. (U.S. Energy Department photo/Public domain)

CARLSBAD, New Mexico – When America’s first nuclear weapons were tested in south-central New Mexico they set off generations of strife as nearby communities struggled with cancers and other health problems many feared were a direct impact of associated radiation.

Those downwinders living in remote communities like Carrizozo now have two more years to fight for reparations after a federal bill passed the U.S. House this week.

Following its Senate passage, the measure was headed to President Joe Biden’s desk to be signed into law, the Carlsbad Current-Argus reported.

And the same for the downwinders in Mohave County, Arizona, and southern Clark County, Nevada.

U.S. Rep. Greg Stanton (D-Arizona) expressed his disappointment in a news release that both chambers of Congress voted to extend the Radiation Exposure Compensation Act (RECA) program for two years without expanding eligibility to downwinders in lower Mohave County.

In remarks on the House floor before passage, Stanton said he’s hopeful that the short-term extension will encourage lawmakers to seek a long-term solution that provides much-deserved justice to families in Arizona.

“Tragically, families in the lower portions of Mohave and Clark Counties have lost spouses, parents, siblings, and loved ones to radiation illnesses, and it is an absolute shame that they have been left behind by their federal government,” Stanton said. “I am disappointed that this bill does not include more Downwinders, but I am hopeful that we can use this two-year extension of time to find a way forward to expand Downwinder eligibility.”

The bill will extend the Radiation Exposure Compensation Act that creates a structure for cash payments to nuclear workers and those living near nuclear activities that could be exposed to radiation.

The bill was set to sunset this summer, ending the payments, but with the recent bill’s passage RECA will stay active until May 2024.

New Mexico’s uranium miners in northern portion of the state are included in the funding and eligible for up to $100,000 while other nuclear workers can get payments up to $75,000 depending on their health issues.

There are 10 other sites identified by the federal government to have uranium workers eligible for payments, but only counties in Arizona, Nevada and Utah have eligible downwinders that can get up to $50,000 in reparations.

Those communities are believed to be “downwind” from the Nevada Test Site, which began to test nuclear weapons in 1951, but do not included any affected by the Trinity Site where the first bombs were tested in 1945.

Tina Cordova, founder of the Tularosa Basin Downwinders Consortium, said the extension will not only allow more impacted people to apply for the payments but also give New Mexico’s congresspeople more time to advocate that RECA be expanded to include her state’s downwinders.

“We’re American citizens too. We just ask when we will be acknowledged,” Cordova said. “I don’t know if people fully understand the impact of all this on New Mexico. The negative economic of people being sick is devastating.

“People are left literally destitute at the end of their life, because they have spent everything they had to try to save their life.”

Those health impacts, Cordova argued, lead to an economic depression in small communities like Carrizozo, population about 800, as residents struggle to afford medical bills throughout their life.

The payments that could be available through RECA’s expansion she said, if given to even a small number of New Mexico downwinders could uplift desolate, forgotten places like Carrizozo and lead to a financial boon for the state.

“No generational wealth is ever developed. We see that as part of the narrative in our communities,” she said. “This is essential to make people’s lives whole again and give them resources they need.”

The RECA Extension Act of 2022 was cosponsored by both New Mexico’s Democrat U.S. Sens. Martin Heinrich and Ben Ray Lujan.

Lujan said Congress must now work to expand law so his constituents can get the reparations they deserve.

“This two-year extension of RECA is a victory for radiation exposure victims in New Mexico and it gives Congress the necessary time to act on a long-term extension and expansion of benefits and eligibility,” Lujan said.

U.S. Rep. Teresa Leger Fernandez introduced legislation last year to add New Mexico downwinders to the list of those eligible for the payments and raise the payments to $150,000. That bill was approved by the House Judiciary Committee in December and awaits a vote on the House floor.

“Unfortunately, decades later, many New Mexicans continue to fall ill due to radiation exposure,” Leger Fernandez said. “This two-year extension of RECA is a step in the right direction to secure a long-term extension and expansion of benefits and eligibility, but we have more work to do; we can’t turn our backs on our communities.”

Among the 68 co-sponsors from both parties of Leger Fernandez’s RECA amendment bill, U.S. Rep. Yvette Herrell, R-New Mexico, in rare bipartisan move, signed on and supported the legislation.

The Trinity Site falls within in Herrell’s Second Congressional District and she said expanding RECA was needed to make exposed New Mexicans whole.

“This legislation is vital to ensuring that the men and women who were harmed by the development and testing at the dawn of the nuclear age are compensated by the government that put them in harms way,” she said of the extension bill.

“My constituents — the uranium miners, mill workers, uranium ore transporters, and those who lived downwind of atmospheric nuclear tests — deserve our thanks and assistance and I am proud to have fought for this legislation,” Herrell said.