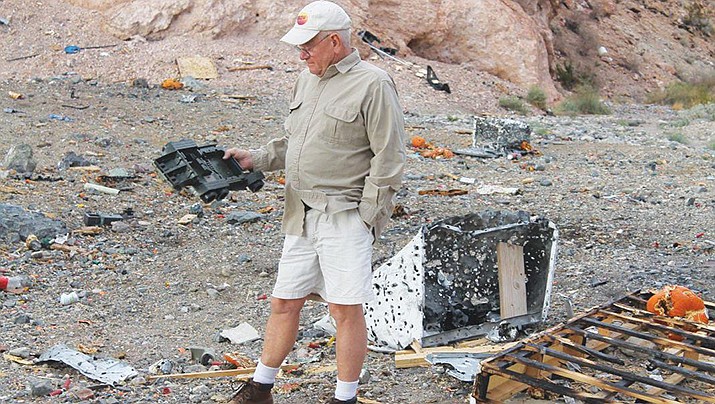 Rodger Melton shows the kind of trash that gets dumped in the desert near Paso De Oro Drive in Lake Havasu City in 2014. (Photo by Today’s News-Herald/For the Miner)

KINGMAN - The U.S. Bureau of Land Management has for decades fought illegal dumping on Mohave County’s public lands, but they may not be able to do so without aid from local law enforcement. Agency officials are expected to address the issue with a presentation on Monday, May 16 before the county’s governing board.

According to BLM Public Affairs Specialist Rodney Crum, local and federal officials have routinely encountered sites where household items including televisions, clothes washers and hazardous materials have been abandoned in Mohave County’s desert areas. Even larger items including boats, personal watercraft, ties and construction pallets have been dumped in the wilderness surrounding Lake Havasu City.

“The Lake Havasu (BLM) Field Office has regular and frequent issues with dumping on public lands,” Crum said this week. “This issue is addressed by our law enforcement team, but we are not equipped to prevent it from happening.”

According to Crum, illegal dumping is known to impact the quality of life of Havasu residents, but there may be solutions to curb future littering on state and federal lands that surround the city.

“We would like to see dump fees or schedules regularly advertised, and for (waste companies) to add more free dump days to the calendar to deal with some of the dumping. We’d also like to see some solutions for preventing and holding parties accountable, which we are open to discuss at the meeting.”

Crum says the issue of illegal dumping in Mohave County continues to grow each year, in proportion to a growing population in Western Arizona. According to Crum, the BLM expects to see more abandoned vehicles and homeless camp on public lands in the future.

“When the law enforcement agencies find a responsible party, that party is sent before a judge and fined or allowed to clean up their dumpsite,” Crum said. “When we don’t find the responsible party, we contract for the removal of hazardous materials and work with the community to organize clean-up events.”

The BLM often works with local organizations such as the Havasu 4 Wheelers, the Lake Havasu Side-by-Side Trails Association and members of Havasu’s shooting community to arrange for the cleaning of known dump-sites surrounding the city.