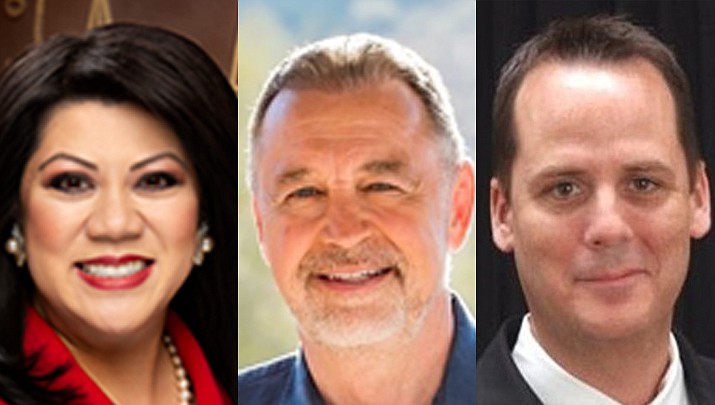 Salmon, who also spoke to KRW in October, is a familiar face in Arizona politics. A former U.S. congressman and Arizona state senator, he began his career in 1990 and has earned a reputation for standing on principle and challenging the status quo. He ultimately became a co-founder of the House Freedom Caucus with other conservative leaders such as Florida Gov. Ron DeSantis and U.S. Rep. Jim Jordan.

In 2001, Salmon honored his self-imposed term limit pledge and returned to the private sector. He stated his decision to return to public service was due to the growth of the size of government, the national debt and shrinking individual freedoms.

Salmon supports school choice, getting rid of the state income tax, and protecting the border, and he wants to make the ban on ballot harvesting permanent. “I believe that the tax dollars need to stay with the kid and parents need to decide what school their kids attend,” Salmon said.

Current state Treasurer Kimberly Yee is running for a second term. She oversees the cash management of Arizona’s $40 billion state budget and payments to agencies, local governments and schools. Her office manages $19 billion in assets.

State Rep. Jeff Wenninger is also running for treasurer. He was first elected to represent District 17 (which includes Gilbert, Chandler and Sun Lakes) in 2014. Wenninger is the chairman of the House Commerce Committee and serves on the House Banking and Insurance and Ways and Means committees. Before serving as a state representative, Wenninger served on the Chandler City Council and held the position of vice-mayor. He is co-owner of two restaurants in the Phoenix area.

Retired U.S. Army Command Sergeant John Gillette is running in a crowded race for state representative in the newly redistricted LD30. He possesses awards for Meritorious Service, the Bronze Star, and Army Accommodation. He served in Europe, Central and South America, the Middle East and the former Soviet Union. His three main areas of interest are border security, water and big tech.

“I will push to make the U.S. Code regarding inducement Arizona law, making it unlawful to aide illegal aliens or inducing unlawful stay in Arizona,” he said. “This will have a large impact on NGOs (non-governmental agencies) and state agencies ... (and) will augment efforts to secure election integrity.”

The Kingman Republican Women meet on the first Monday of each month at 11:30 a.m. for lunch and the meeting begins at noon. Meetings are held at the College Park Church Community Center, 1990 Jagerson Ave.

Meetings are open to the public and membership is not required.

There is a $3 fee to cover the cost of the meeting room.

A light lunch will be available for a nominal fee. Brown baggers are welcome.