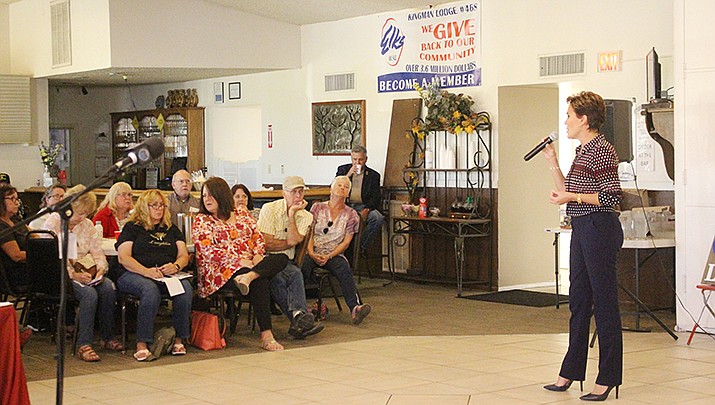 And according to gubernatorial candidate Kari Lake, the stakes couldn’t be higher for the Republican party.

“What I’m witnessing on the campaign trail is that Americans are off the sidelines,” Lake said during her Wednesday visit to Havasu. “They are in the fourth quarter, with just a couple of minutes left on the clock, and we realize that we’ve got to win this battle.”

“I’m not surprised that there’s a huge upsurge in turnout by Republican voters,” Lake said. “A lot of them, I think, are actually former Independents or Democrats who realize the policies of Joe Biden and the Left are disastrous. They’re going to vote for me, and ‘America First’ candidates up and down the ballot, because we are not going to let Joe Biden drag Arizona down the tubes.”

With the departure of Arizona Governor Doug Ducey next year, Lake has already gained former president Donal Trump’s endorsement in her run for the governor’s seat. And Lake believes it will give her an edge over competing Republicans later this year.

“The President Trump endorsement is massive,” Lake said. “His record is pretty good. People are listening to what President Trump is saying. He’s identifying with people who are going to be fighters and push forward American policies. Businesses want to come back from overseas, and we want to make sure that our energy prices are low. We want to start drilling again, we want to make sure our border is secure.”

Lake said that a key focus of Arizona’s Republican leaders in the near future will be to combat the smuggling of fentanyl by Latin American cartels into the United States. According to Lake, the key to that effort will be tougher control over ports of entry and greater vigilance on the U.S.-Mexican border.

Another key issue for Lake is the issue of abortion, which has risen to the forefront in recent weeks with the publication of a possible draft-opinion by the United State Supreme Court, which would render the issue of abortion a challege for each state to decide on its own.

“I think we’ve got some good laws on the books (for abortion),” Lake said. “And a lot of pro-abortionists have pushed this issue to the point of depravity. They’re pushing for abortion right up until the point of birth and even infanticide … I want to support women who are afraid of an unexpected pregnancy and I want to support them. But support shouldn’t be sending them to a place like Planned Parenthood, where the only option they give them is the absolute worst option in the world … That woman will live with that pain for the rest of her life.”

Lake instead advocated for adoption of unexpected or unwanted pregnancies.

“We need to give people options. And those options need to include carrying that baby, to take care of that baby and enjoy the beauty of motherhood,” Lake said. “Or if they can’t do so, there are many people who would love to have a child. Those are healthier options.”

The Primaries are still ahead

The Arizona Republican and Democratic Primary Elections are scheduled to take place Aug. 2.