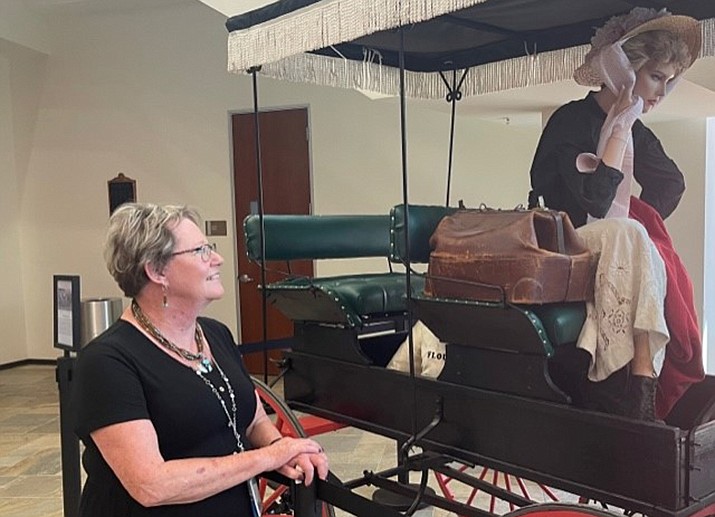 Mohave County Public Fiduciary Carole Collins admires the surrey, on loan from the Mohave County Museum of History and Arts, currently on display in the lobby of the County Administration Building. (Courtesy photo)

KINGMAN – Carole Collins has been the Mohave County Public Fiduciary since 2017. It is a demanding and often misunderstood type of public service where she operates with a small staff of five. Collins herself says “it’s a tough job,” adding, “it has been the most frustrating, heartbreaking and, at the same time, rewarding experience in my professional career.”

One definition of a fiduciary is “a person to whom property or power is entrusted for the benefit of another.” According to a county press release, in her public role, Collins says she and her staff “end up in a parent/child relationship with most of our wards. We are the last resort for them.”

“There is a mistaken belief that if the Public Fiduciary is appointed to represent an incapacitated person, that person will be immediately qualified for long term care or other services,” Collins said. “Unfortunately, that is not true. MCPF staff members have to apply for benefits for our wards in order to get them established into an appropriate setting. That process is extremely difficult and often takes several attempts over several months.”

Collins knows that there are many occasions where despite the efforts of her department, a person simply will not end up being qualified and services are limited to what can be achieved with a ward’s personal income. She believes strongly that her department “only succeeds because I have one of the best, and most dedicated, caring staff.”

Collins was born in Provo, Utah, remaining there only until age six before the family relocated to Kingman. She is married and has four children, seven grandchildren, two rescue dogs and four feral cats. While in high school, Dorothy Hendrix, the mother of former Mohave County Manager Mike Hendrix, assisted her with employment with a local attorney through a job placement program Kingman High School had at the time. She continued working for attorneys in private practice from 1977 through 2017.

In 2006, recognizing that Mohave County had a lack of fiduciaries in Mohave County, Collins pursued licensure through the Arizona Supreme Court and was granted a fiduciary license in 2007. She further secured certification as a Legal Document Preparer through the Arizona Supreme Court in 2013. In 2017 she was approached about applying for Interim Public Fiduciary. She applied, got the job and eventually became the permanent fiduciary. She has worked for and with some of the top attorneys to practice in Mohave County, where she gained experience in domestic relations, real estate, litigation, estate planning, guardian, conservator and probate law. Each have provided her with a unique opportunity to successfully practice as a fiduciary.

Collins says that most of the county’s clients are indigent or they just have a relatively small monthly income. Her department makes their decisions, helps with medical care, determines where they live, and who they associate with. Demand is increasing and she realizes that more staff will be needed. The case load is “ebb and flow,” but it’s always busy for the staff. Local hospitals and nursing homes are partners in the arduous process.

Collins feels the most important thing to realize is that “families need to step up. Society has changed and families are not as close knit or living nearby. Non-profits are overwhelmed.”

She believes it’s vital that the elderly, when their minds and bodies are still in relatively good shape, must get estate planning documents prepared. She adds, “you need a person in your life who you can trust and knows where your documents are. Make plans, have a will, power of attorney, and arrange a pre-paid funeral.”

These crucial decisions are necessary and the county government is limited to serving only those in absolute need and even there, it may simply not be enough.