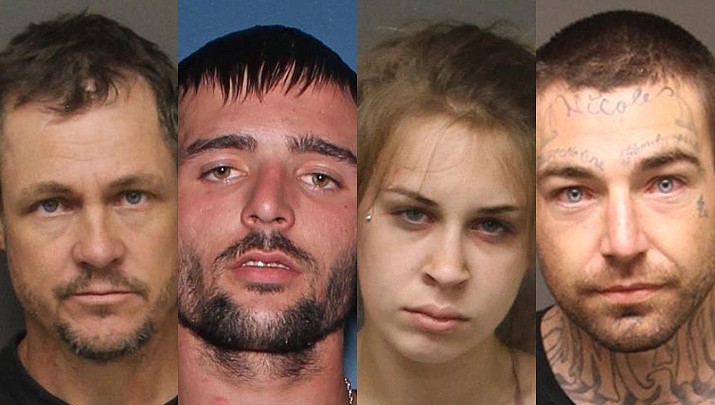 KINGMAN – Two Kingman area residents are now awaiting trial on felony charges in connection to a string of murders allegedly committed earlier this month in Las Vegas and Mohave County.

Mohave County law enforcement officials believe that Hunter A. McGuire, 26, may have been responsible for at least five suspected homicides this year. Now alleged accomplice Michael Turner, 31, is awaiting indictment on charges of first-degree murder. Two other suspects connected to McGuire were arraigned Thursday in Mohave Superior Court on felony charges of hindering prosecution.

But McGuire himself may have escaped justice. On Oct. 21, McGuire was found deceased from a self-inflicted gunshot wound after a four-hour standoff with multiple law enforcement agencies. McGuire’s girlfriend, identified as 32-year-old Samantha Branek, was also found deceased at the scene.

McGuire was wanted in Mohave County and by the Las Vegas Metropolitan Police Department last month. He is believed to have been responsible for the shooting deaths of Retta Atkins and Darren VanHouten in their Kingman residence on June 28.

He is also believed to have committed the murder of 42-year-old Golden Valley resident Joshua William-James Blake on Aug. 31. Investigators now believe that Turner acted with McGuire in Blake’s death, with both men shooting and killing the victim at the scene.

According to the Mohave County Sheriff’s Office, Blake’s body was buried on an abandoned property, a short distance from where McGuire was living at the time of the victim’s death. Turner was living at Blake’s residence at that time, and had allegedly been involved in an argument with Blake days prior to the alleged murder about non-payment of rent and possible eviction.

After Blake’s death, Turner attempted to notarize a bill of sale in an attempt to take possession of Blake’s home, according to reporting by the Kingman Miner last month.

Turner was arrested in connection with Blake’s death on Sept. 1, during a traffic stop in which he was allegedly found to be driving a vehicle owned by Blake.

After Blake’s murder, McGuire temporarily took residence with a homeowner in Las Vegas. The two allegedly argued about his presence at the home on Oct. 17, during which McGuire drew a weapon and fatally shot the victim.

McGuire fled the scene before first responders arrived and returned to Mohave County.

When Mohave County Sheriff’s deputies arrived at the scene of Nelson’s murder to investigate, deputies reported that they were approached by a man identified as 42-year-old Timothy W. Burt.

According to investigators, Burt told investigators that he and Nelson had come to the property to retrieve a trailer that was stolen from them, and that McGuire shot Nelson during that confrontation. But according to the Mohave County Sheriff’s Office, Burt’s statements proved inconsistent. Burt was ultimately charged with one felony count of hindering prosecution.

Law enforcement officials sought McGuire and Branek last month in their investigation, with a $4,000 reward offered by Mohave Silent Witness for any information leading to their arrest.

On Oct. 21, Branek’s vehicle was seen in the area of Alamo Road in Yucca, and law enforcement officials followed. According to investigators, the vehicle was occupied by Branek, McGuire and 24-year-old Brittany Conkling.

Police say that law enforcement officials pursued Branek’s vehicle for 35 miles before it slid from the roadway, and became disabled. With an Arizona Department of Public Safety helicopter providing aerial surveillance, the car’s occupants exited the vehicle and ran into the surrounding desert area.

Conkling was soon apprehended, while police attempted to negotiate McGuire’s and Branek’s surrender. According to investigators, Conkling admitted to knowing that McGuire was wanted on multiple counts of murder, and allegedly concealed evidence in the case.

Turner has been identified by prosecutors as a repetitive offender under Arizona statute, with prior convictions including armed robbery, possession of drug paraphernalia and resisting arrest in 2010, and a 2015 conviction on charges of first degree burglary.

He was additionally charged on Oct. 28 with a single count of premeditated first-degree murder, and now awaits a new indictment for the offense in Mohave Superior Court.

As of Thursday, Turner remained in custody at Mohave County Jail on $1 million bond.

Burt and Conkling also remained in custody at Mohave County Jail this week. According to felony indictments in Burt’s and Conkling’s cases, both attempted to hinder the apprehension, prosecution, conviction or punishment of Hunter McGuire, or otherwise rendered assistance to McGuire.

Both were arraigned Thursday in Mohave Superior Court, and are scheduled to appear for pre-trial conferences in their respective cases next month.