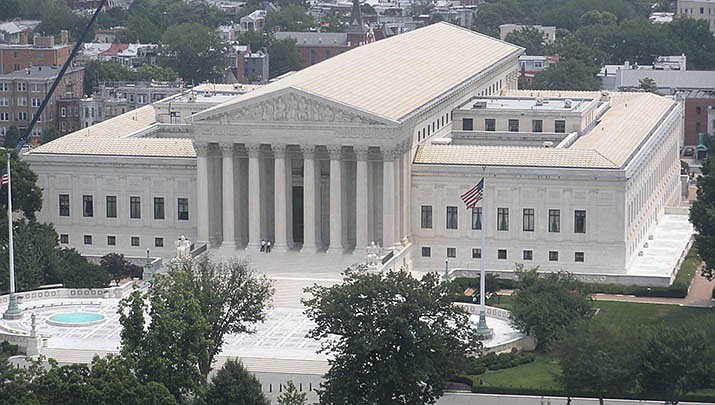 The U.S. Supreme Court declined Monday to void Arizona law which allows criminal trials to be conducted – and people to be convicted and sent to prison – with juries of just eight people. (Photo by kallerna, cc-by-sa-4.0, https://bit.ly/39ykpqc)

PHOENIX – It’s not allowed in 44 states.

But the U.S. Supreme Court refused Monday to void Arizona law which allows criminal trials to be conducted – and people to be convicted and sent to prison – with juries of just eight people.

Without comment, the majority of the justices upheld the statute which says that a 12-member jury is necessary only when the crime charged carries a prison term of 30 years or more. And they saw no reason to even address the law given that Ramin Khorrami faced no more than 12.5 years on charges of theft and fraudulent schemes in connection with his bid to extort money from a married woman with whom he was having an affair.

There also was some precedent: The high court in 1970 refused to disturb a Florida law which allowed someone to be convicted by a six-member jury.

But the decision not to even review the law drew a stinging dissent from Justice Neil Gorsuch, appointed to the court in 2017, who said that 1970 ruling “was wrong the day it was decided.’’

“It remains wrong today,’’ he continued. “And it impairs both the integrity of the American criminal justice system and the liberties of those who come before our nation’s courts.’’

According to court records, Khorrami began a romantic relationship in 2012 with a woman living in Arizona. She told him she planned to leave her husband.

A year later the relationship soured and he threatened to tell her husband unless she paid him $30,000 and continued the affair. Eventually after paying him another $4,000 she realized he would not keep his end of the bargain and told her husband, who reported Khorrami to the police.

The eight-member jury unanimously convicted him of the two charges. He was placed on probation which included a two-month jail term.

Only later, on appeal, did he say he was constitutionally entitled to a 12-member jury, an argument rejected by the state Court of Appeals which the Arizona Supreme Court refused to overturn. That led to his petition to the U.S. Supreme Court.

Attorney General Mark Brnovich urged the justices to spurn the request, citing the precedent of the 1970 decision. And he argued that reversing that ruling would upset not just the law in Arizona but also in Connecticut, Florida, Indiana, Massachusetts and Utah.

Gorsuch, however, called that 1970 ruling an aberration to what he said has been centuries of understanding and precedent requiring a 12-member jury.

It starts, he said, with the Sixth Amendment requiring a trial by jury.

“A mountain of evidence suggests that, both and the time of the amendment’s adoption and for most of our nation’s history, the right to a trial by jury for serious criminal offenses meant a trial before 12 members of the community -- nothing less,’’ he wrote in his 10-page dissent. “By the time of the Sixth Amendment’s adoption, the 12-person criminal trial was an institution with a nearly 400-year-old tradition in England.’’

Gorsuch also pointed out that the court itself addressed the situation as far back as 1898 when it concluded a 12-person jury was clearly the intent of Congress.

All that changed in 1970, he said, when the majority simply assumed that the 12-member rule “rests on little more than mystical or superstitious insights’’ and suggested there was no reason to assume a smaller jury would be less fair.

“None of this supplies a sound basis for judicial tinkering with an ancient tradition,’’ Gorsuch said.

In fact, he said, evidence presented to the justices eight years after the 1970 decision suggested that smaller juries are less likely to foster effective group deliberation and raised doubts about the accuracy of results. There even was the conclusion that as juries become smaller, the variance works against the defense.

And Gorsuch said there has been other research since.

The bottom line, Gorsuch said, was the 1970 decision abandoned the historical understanding that a trial by jury meant 12 members on the panel “and enshrined in its place bad social science parading as law.’’

“That mistake continues to undermine the integrity of the nation’s judicial proceedings and deny the American people a liberty their predecessors long and justly considered inviolable,’’ he said.

“Today’s (Arizona) case presented us with an opportunity to correct the error and admit what we know the law is and has always been,’’ Gorsuch continued. “Respectfully, we should have done just that.’’