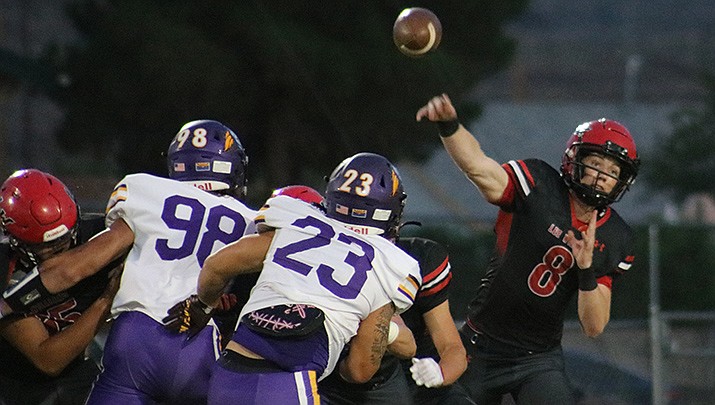 The Lee Williams High School football team is hoping that an upset win over No. 10 Bradshaw Mountain this week could vault the Volunteers into the Class 4A state playoffs. Lee Williams quarterback Troy Edwards is pictured. (Miner file photo)

PRESCOTT VALLEY – The Lee Williams High School football team moved up one spot in the rankings with a 40-18 home win over Mingus Union last weekend. The Volunteers are now ranked 19th in the state in Class 4A with one regular season game left to play. The top 16 teams make the playoffs.

Fortunately for the 6-3 Volunteers, a win in their finale could vault them into the playoff field, as they face No. 10 Bradshaw Mountain at 7 p.m. Friday, Nov. 11 in Prescott Valley.

The teams have had four mutual opponents – Mingus Union, Prescott, Coconino and Flagstaff. The Bears were 4-0 in those games, while Lee Williams was 3-1.

Bradshaw Mountain got off to a slow start this year with a 1-3 record, before recovering to win their past five games. They’re coming off a 49-6 pasting of Flagstaff, scoring all of their points in the first half.

Junior running back Gabriel Ricketts led the way for Bradshaw Mountain with 162 yards on just 14 carries. He’s rushed for 1,257 yards in nine games while scoring 11 touchdowns this season.

Lee Williams has the advantage in the passing game, with senior Troy Edwards throwing for 2,070 yards and 23 touchdowns while completing 65% of his passes. His favorite targets include sophomore Reilly Feil (47 catches, 766 yards, 12 touchdowns) and junior Devin White (37 catches, 861 yards, six touchdowns).

The Volunteers are coming off a 40-18 win over Mingus Union, a team that Bradshaw beat 41-0.

Junior running back Kruz Yokum had touchdowns runs of 7, 3 and 8 yards and ran for 132 yards on just 12 carries for Lee Williams in the Mingus game. Edwards threw two touchdown passes and ran for another. Feil caught five passes for 98 yards and a score.

Senior Drayden Allen had a team-high nine tackles and a quarterback sack, while seniors Reno Ramirez and Brayden Petersen added eight tackles each. Edwards and junior Sam Amor each recovered a fumble.