US inflation eased to 7.7% in October 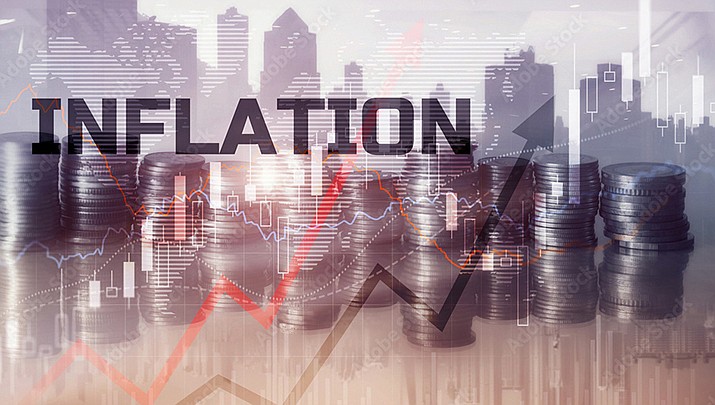 Price increases moderated in the United States last month in the latest sign that the inflation pressures that have gripped the nation might be easing. (Adobe image)

WASHINGTON – Price increases moderated in the United States last month in the latest sign that the inflation pressures that have gripped the nation might be easing as the economy slows and Americans grow more cautious.

Consumer inflation reached 7.7% in October from a year earlier and 0.4% from September, the government said Thursday. The year-over-year increase, down from 8.2% in September, was the smallest rise since January. A separate gauge called core inflation, which excludes volatile food and energy, rose 6.3% in the past 12 months and 0.3% from September.

The numbers were all lower than economists had expected.

Helping drive the inflation slowdown from September to October were used car prices, which dropped for a fourth straight month. Prices of clothing and medical care also fell. Food price increases slowed. By contrast, energy prices rebounded in October after having declined in August and September.

Even with last month’s tentative easing of inflation, the Federal Reserve is widely expected to continue raising interest rates to cool the economy and stem inflation. Yet data released Thursday raises the possibility that the Fed could at least slow its rate hikes — a prospect that sent U.S. markets soaring early Thursday.

“We expect this to mark the start of a much longer disinflationary trend that we think will convince the Fed to halt its (hikes) early next year,” said Paul Ashworth, chief North American economist at Capital Economics, a consulting firm. “With supply shortages normalizing, deflationary pressure is now finally showing up.”

Many economists have warned that in continuing to tighten credit, the central bank could spark a recession by next year. The Fed has already raised its benchmark interest rate six times in sizable increments this year, heightening the risk that prohibitively high borrowing rates homes for homes, autos and other big-ticket items, will tip the world’s largest economy into recession.

Some economists believe the most recent data shows the hikes are beginning to achieve their purpose, though the Fed needs to see further evidence.

“The data will be welcome news for the (Fed), finally showing some response in prices” to the rate increases, said Rubeela Farooqi, chief U.S. economist at High Frequency Economics.

In the midterm elections that ended Tuesday, roughly half of voters cited inflation as the top factor in their decisions, according to VoteCast, an extensive survey of more than 94,000 voters nationwide conducted for The Associated Press by NORC at the University of Chicago. About eight in 10 said the economy was in bad shape, and a slim majority blamed President Joe Biden’s policies for worsening inflation. Just under half said factors beyond Biden’s control, such as Russia’s invasion of Ukraine, were to blame.

Economic anxieties may have contributed to the loss of Democratic seats in the House of Representatives, though Republicans failed to score the huge political gains that many had expected. And a sizable chunk of voters — 44%, according to VoteCast — said their top concern was the future of democracy, an issue that was emphasized by Biden and Democratic congressional candidates in an era of unfounded election denial.

Even before the release of Thursday’s figures, inflation by some measures had begun to ease and could continue to do so in coming months. There is evidence that the robust pay increases of the past 18 months have leveled off and begun to fall. Though worker pay is not a primary driver of higher prices, it can compound inflationary pressures if companies offset their higher labor costs by raising prices.

Except for automakers, which are still struggling to acquire the computer chips they need, supply chain disruptions have largely unsnarled. The backup of cargo ships off the port of Los Angeles and Long Beach has been cleared.

Rents, according to outlets like ApartmentList and Zillow, have begun to fall and that should begin to show up in government data soon, signaling weaker inflation.

Despite fears of a recession, the nation’s job market has remained resilient. Employers have added a healthy average of 407,000 jobs a month, and the unemployment rate is just 3.7%, close to a half-century low. Job openings are still at historically high levels.

But the Fed’s rate hikes have inflicted severe damage on the American housing market. The average rate on a 30-year fixed mortgage has more than doubled over the past year and topped 7% this week. As a result, investment in housing collapsed in the July-September quarter, falling at a 26% annual rate.

Higher mortgage rates have depressed sales. Home prices are slowing sharply compared with a year ago and have begun to fall on a monthly basis. The cost of a new apartment lease is also declining.

And amid a hot jobs market, layoffs have begun in real estate and other sectors sensitive to interest rate hikes.

The U.S. has also managed to dodge inflation levels that have seeped into other national economies after a global pandemic. Higher prices are taking a higher toll in Europe, which is feeling the acute effects of an energy crisis triggered by Russia’s war in Ukraine.

Rising prices, especially for food and energy, have unleashed a wave of protests and strikes in recent months, with nurses, pilots, rail workers and others seeking higher pay or government intervention as their cost of living soars.

Inflation hit a record 10.7% in the 19-country euro area last month, largely driven by energy prices, and though European leaders have approved relief packages to help people with their natural gas and electricity bills, the discontent threatens political turmoil.

Inflation is squeezing people around the world, with Russia’s invasion disrupting food and fuel supplies to countries in Africa, Asia and the Middle East, while their currencies have weakened against a strong U.S. dollar, further pushing up costs.