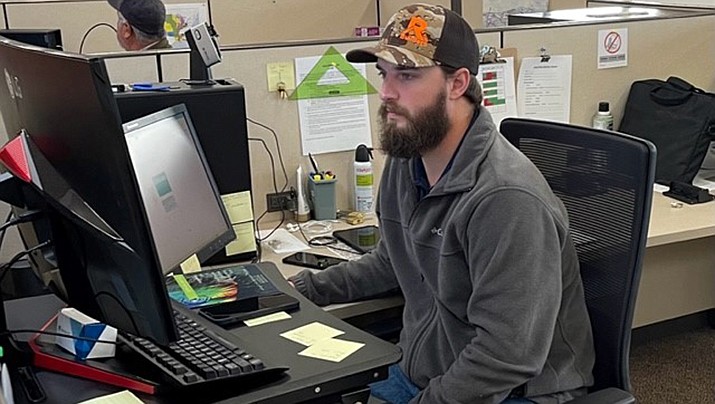 “I do a lot of the public research that comes to the survey department as well. I go out into the field and fly a set area of land taking hundreds of pictures in a specific orientation and then bring those back to the office,” Key said.

From that point, “I use mapping software to create usable data for engineering planning and projects,” he explained.

Key elaborates on his job, pointing out “I can make whole 3D models of a county site after I have processed the drone imagery. Using the drone and survey equipment we are able to create accurate position and elevation data for an entire area in very little time compared to traditional survey methods.”

He takes presubscribed planned pictures of an area and uses that imagery to create data through software and map it. Key takes that and then converts the data into 3D models where he can generate topography for engineering projects.”

It’s state of the art, important technology the county uses.

Key is a licensed drone pilot. Much of his training started with the U S Army in 2013, which he was in for six years.

When he signed up, flying drones interested him and for most of his military career that’s exactly what he did, eventually teaching 24 others in his detachment. Much of the work was done in Colorado Springs, but he also had two tours of duty overseas, including in the Middle East.

Key grew up in Kingman. In high school, he played baseball, football and basketball. He remains a fan of all Arizona professional sports teams – the Cardinals, Diamondbacks, and Suns.

After graduating high school in 2012 and his Army tenure, he went to Arizona’s prestigious Embrey Riddle Aeronautical University for a few years before moving back to Kingman and landing the county job.

Now, his family locally includes his parents, his significant other (with marriage plans in the relatively near future) and Maverick, his beloved German short-haired pointer.

Key also travels to do drone demonstrations for kids for S.T.E.M. It’s more than an acronym for Science, Technology, Engineering and Math. It’s the integrated nature of how our world works. The S.T.E.M. program states its mission is to give kids “the tools to deeply understand the changing world. Involvement with S.T.E.M. develops the critical thinking process tool necessary for the 21st century workforce.”

Talking about his county position, Key states: “I like the job itself. It offers me a lot of room to grow. It’s something I’m enjoying. Adapting my skills to different projects that we have because not all projects are alike. Because of the size of our county, we have a large scope of work. It’s a lot of fun to be able to use my skills for different projects.”

His position offers mostly solo work and considerable freedom. That’s worthwhile in itself. However, make no mistake, he doesn’t go out and fly drones as a hobby.

For relaxation, he prefers hunting and occasionally watching a Suns game. That’s the life he’s grounded in.