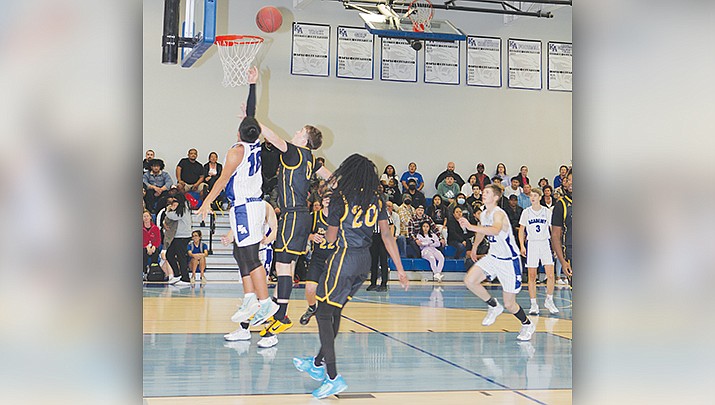 Junior Logan Drummond shoots from short range for the Kingman High School Bulldogs basketball team during a 48-46 loss to Kingman Academy on Thursday, Nov. 17. (Photo by Claude Saravia/For the Miner)

The Tigers jumped out to a quick 11-0 lead in the first quarter and maintained control throughout the first three quarters before a furious comeback by the Bulldogs fell short in the final seconds of the game.

The Tigers were led on offense by Jacob Parrott, who tallied a game high of 17 points.

Neo Walema led the Bulldogs with 14 points. Walema, who was scoreless through the first three quarters, came alive in the fourth quarter to help the Bulldogs cut the lead to 47-46 with just over a minute left.

Parrott was fouled with 41 seconds left on the clock. He hit his first free throw to extend the lead to 48-46 but then missed the second. Jordan Primm of the Bulldogs secured the rebound, but his pass was immediately intercepted by Parrot.

Parrot then passed to Malachi Zephier who dribbled the ball off his foot to give the Bulldogs one final chance with 32.7 seconds remaining.

Walema missed a three-pointer which was rebounded by the Tigers but then stolen by the Bulldogs Michael McCulley, who charged towards the basket in the dying seconds but missed a layup that would have tied the game. Dominick Kinney got the offensive rebound but also missed a layup, ending the game with a victory for the Tigers.

Bulldogs Coach Nick Juby said he was proud of his team for battling back but said they had to work on shooting and finishing better.

“My guys battled their butts off all night,” Juby said. “We were in a 15-point hole at one point and got it within a layup of sending the game to overtime.”

“Tonight was a great experience for not only our players but for our entire community,” McDavid said.

The season-opening game included a cancer awareness fundraiser, the KAOL Shoot for the Cure 2022. Attendees participated in a raffle for prizes, with all proceeds going to the Kingman Cancer Care Unit. At halftime, fans and players alike joined in a circle to honor those in the community who are fighting or have fought cancer.

“Being a community service game, we were able to provide for the community and give them a chance to show how much they love their loved ones who have maybe battled through or lost their battle with cancer,” McDavid said.

“And second to that, we (also) had a basketball game. And it was fantastic. We played Kingman High and we love playing our in-town rivals and they always give us a great show. Coach Juby always puts his best team forward for us and we love these intense games. As much as it breaks my heart sometimes if we win or lose, we love them.”

Juby also said he loves playing the in-town rivals and it is always an exciting event for players and fans.

“Like I always tell Coach McDavid, every time we play each other, it is the most fun game in town. It is never a dull game when you come to a KAHS-KAOL game. It always sucks when you come up in the wrong end.”