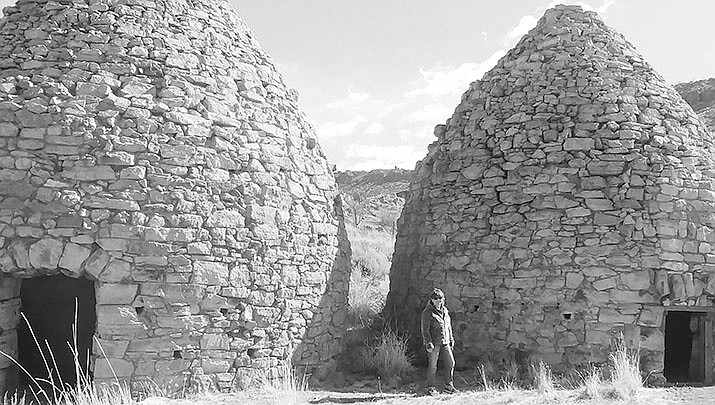 Beehive-shaped charcoal ovens are pictured in the Stateline Mining District in Lincoln County, Nevada. (Photo by Luis Vega/For the Miner)

KINGMAN – Recovering gold and silver was a hard process in Mohave County during pioneer days. If the ore was rich enough, it was hauled by mule to the Colorado River, then by riverboat to the Gulf of California, then on an ocean-going ship to Swansea, Wales for processing to recover and purify the gold and silver. As you can imagine, the ore had to be extremely rich to cover all that cost. As more advanced methods of recovery were developed and the lower-grade ores could be processed locally, metallurgists needed locally produced supplies to run their processes. One of the items needed was charcoal (also called coke) to melt the gold and silver.

Charcoal is made by slow burning wood to drive off the volatile components – water, hydrogen, methane and tar – of the wood, leaving charcoal that is more energy-dense than the original wood. In other words, it burns hotter and weighs about 25% less. To do this slow burning, a structure was needed that was fire resistant, could hold a large amount of wood, and the flow of oxygen could be controlled so that the wood wouldn’t be completely burned. Enter the charcoal oven.

There are at least two different shapes that were used in the old days. In the southwest U.S., the beehive shape is most common. In Mexico and South American countries, the pyramid shape was most common. Not sure if that was because of who built it or if there were other reasons but it seems there’s a definite difference in shapes depending on where you are. Also, they are always in groups of three. If anyone knows why, let me know.

It’s quite exciting to find charcoal ovens out in the hills. They are a connection to the past. The best-preserved beehive-shaped ovens I know of are located at Ward Charcoal Ovens State Historic Park near Ely, Nevada. There are six ovens in the shape of beehives measuring 30 feet tall and 27 feet in diameter. They were used from 1870 to 1876 to produce charcoal for the silver mines located near the town of Ward south of present-day Ely. Each load consisted of 35 cords of wood burned for 12 days, and each produced 50 bushels of charcoal.

I’ve seen the remains of ovens at the old mining camps of San Francisco, Beaver County, Utah, the Stateline Mining District on the Nevada-Utah border and near Florence, Arizona. In the mining town of Mineral de Pozos, Mexico, are pyramid-shaped charcoal ovens used for the same purpose as the ones at Ward. The ovens at Ward were built by itinerant Italian stone masons that are a story all to themselves.

I haven’t found large charcoal ovens in Mohave County so they must have used a more primitive method of producing charcoal such as digging a pit and covering the burning wood. I have found old smelters with large amounts of mostly burned charcoal lying around so someone must have been making charcoal. Please let me know if anyone has found charcoal ovens in the hills of Mohave County. I would love to see them.

To supply the ovens, large amounts of wood had to be cut. But not just any wood. It had to be a wood that would produce good charcoal – cedar, oak, mesquite or ironwood. Palo Verde, cactus wood or any of the dry desert trees are no good for making charcoal. Imagine groups of men chopping down these trees from the hills around the ovens. They would deforest vast areas. In the case of ironwood, it was said that ironwood “separated the men from the boys.” The cells of the ironwood tree adsorb silica from the soil and include it in the cell structure, making the wood very hard. It’s so hard and dense that it doesn’t float. Chopping ironwood with an axe would’ve been tough. Today, the ironwood tree is protected in the U.S. In Mexico, the Seri Indians make beautiful ironwood carvings for sale to tourists. We have several pieces that we bought at the Seri village near Kino Bay, Mexico.

There are ovens near Florence, Arizona. I saw these ovens when I was a teenager but I don’t remember much about them. Ovens aren’t that important to a kid prospecting for gold but I do have plans to go back and reconnect with my prospecting heritage as long as I don’t have to chop ironwood.